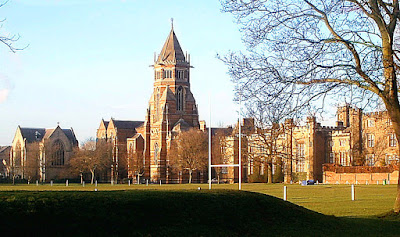 Detective Inspector (DI) Nick Dixon of the Avon and Somerset CID is still recovering from his last case (one that landed him in the hospital) and has just returned from a week holiday on Cyprus. Still a little jetlagged, he’s pulled into a new case. Isobel Swan, a student at Brunel School, has been found murdered. The police need someone undercover inside the school to track down what might have happened. And Dixon is a graduate of a school in the same town, St. Dunstan’s. He knows how public schools work.

Dixon knows even more than the police realize. Isobel looks exactly like Dixon’s school-time girlfriend, who disappeared and was never seen again. Dixon intuitively knows that the same killer is at work. Technically, he should not be involved in the case because of his previous connection. But now he has the chance to find Isobel’s killer, and what happened to his own girlfriend 17 years before.

Posing as a teacher in training, Dixon talks to teachers, staff, and students, sitting through lectures (to maintain his cover) but also carefully watching. Several of the teachers and staff have connections to St. Dunstan’s – either as employees or students. And Dixon knows that one of them must be the killer.

Assisted by Detective Constable Jane Winter (also Dixon’s current girlfriend) and a police team, Dixon looks at both the past and the present to find the murderer. Boyd’s novels are a combination of mystery and police procedural, and they underscore just how much tedious and often repetitious “slogging through” happens in a murder inquiry.

Swansong is another winner for Damien Boyd.

My review of Damien Boyd’s As the Crow Flies.

My review of Damien Boyd’s Head in the Sand.

My review of Damien Boyd’s Kickback.

Top photograph: Rugby School in England, photo via Wikimedia Commons. This is not school featured in Swansong, but it is similar.
Posted by Glynn at 5:00 AM