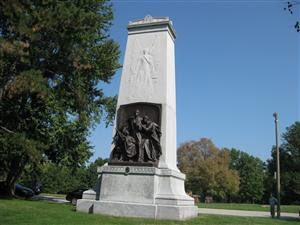 A few months ago, St. Louis had its own Confederate statue controversy. A memorial to the Confederate war dead was erected in 1914 in Forest Park, our big municipal park that contains a golf course, tennis courts, miscellaneous buildings, the St. Louis Art Museum, The St. Louis Zoo, and the Missouri History Museum.  I didn’t know the park had a Confederate memorial; according to polls, neither did 90 percent of the metropolitan population.

The new mayor, elected this spring, saw her main political opponent start a Go Fund Me campaign to remove the statue (the city’s finances are so bad it couldn’t afford to move it). The mayor’s first act in office was to fire the police chief (that was another controversy). The second was to get out ahead of the political opponent’s campaign against the statue. Eventually, after the threat of a suit over ownership, the statue was moved, and given to the Civil War Museum at Jefferson Barracks, a national cemetery in St. Louis County.

Politics is complicated. What looks like one thing on the surface turns out to be something else.

History is also complicated. A popular saying these days is “being on the right side of history.” That is not a historical statement. That’s an ideological statement, most commonly heard from the left side of the political spectrum. A similar statement is “winners write history.” Given how many Southerners have written history books about the Civil War, that’s clearly not true. The South lost the Civil War, but a lot of Southerners have written and continue to write its history.

We have another statue in Forest Park that so far has received very little attention. Francis P. Blair, Jr. was the son of a newspaper owner, a congressman, a solider, a general in the Civil War, and a U.S. Senator. He was anti-slavery and a staunch supporter of Abraham Lincoln in the election of 1860. He played a critical role in keeping Missouri, a slave state, in the Union at the outbreak of the war – and it was a very near thing.

What could be controversial about Francis Blair?

A lot, as it turns out. He opposed the Republicans Reconstruction policy, and abandoned the Republican Party because of it. In 1868, he was on the Democratic ticket for vice president, paired with Horatio Seymour against Republican war hero Ulysses S. Grant. Blair unwittingly played a role in helping elect his opponents – in a series of speeches, he framed the election in strictly racial (and racist) terms, claiming that newly emancipated slaves wanted to attack white women, among several other similar claims.

But he has his statue in Forest Park, and so far, it’s been left alone. History is indeed complicated.

That’s my biggest complaint in this ongoing controversy about statues. The news media frame the stories in cartoon-like terms, as if the rest of us are incapable of seeing and understanding complexity and nuance, so they have to tell us in large and usually distorting pictures. This used to be true only of television news. Now it’s come to include newspapers as well.

In all of its coverage, the St. Louis Post-Dispatch never once mentioned the contemporary municipal politics involved in the Confederate statue debate. It did, however, acknowledge that the newspaper hailed the statue in an editorial when it was erected in 1914. Times change, and the Post-Dispatch wants to be on the right side of history.

One personal benefit of the debate about Confederate statues and the Civil War – I’ve started reading historical accounts of the conflict. Bruce Catton’s Centennial History of the Civil War, published in three volumes from 1961-1965, is still a good resource. So is James McPherson’s Battle Cry of Freedom, published in 1989 and which won the Pulitzer Prize. Just about anything by T. Harry Williams, one of the best Civil War historians who ever lived, is worthwhile.

I grew up in New Orleans, and I was surprised earlier this year to find out that there were no fewer than four Confederate statues in the city. The only one I was familiar with was the one of Robert E. Lee in Lee Circle. I have never seen (or remembered) the one on Canal Street commemorating the so-called “Battle of Liberty Place,” when the White Citizens League attacked the U.S. Customs House in 1874. I only knew about the event because my father had a book about the history of what happened and what resulted – but I didn’t realize there was a monument to it.

The New Orleans Times-Picayune’s coverage of the controversies grossly oversimplified what “The Battle of Liberty Place” was actually about. The coverage left out the outrage over Republican and military corruption and the outright theft of the state and city elections of 1874, which were far more significant contributors to the attack on the Customs House.

Speaking of Go Fund Me and Change.org sites, there is, according to Billboard Magazine, a move afoot to replace the Confederate statues in New Orleans with statues of Britney Spears. I am not making this up. When I last looked, some 6,400 people had signed it. I’m trying to imagine “Britney Spears Circle” on St. Charles Avenue. I’m trying to imagine replacing a historical figure with a pop culture figure.

Somehow, that would fit the times we live in.

Duty, Dishonor, and the South – Rod Dreher at American Conservative.

Top photo: The Confederate Memorial now removed from Forest Park.
Posted by Glynn at 5:00 AM