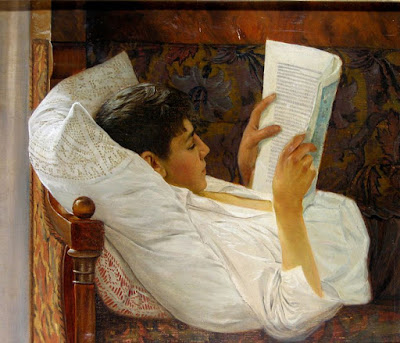 This year is the 100th anniversary of the Bolshevik Revolution. When we were in London, both the Royal Academy of Arts and the British Library had exhibitions related to the revolution, and both of which put something of a chic gloss on what happened (it wasn’t all about art). Communism is something rather chic as well on many American college campuses, like Harvard. Aleksandr Solzhenitsyn wrote an entire series of novels on what led to it and what happened. And he lived the reality of the aftermath. A student at Harvard, whose father fled communism, wrote an article for the Crimson on the reality of that revolution and what it wrought. And the Crimson published it.

It’s the Advent season, and people are writing about it. The five articles linked below are only a few examples of the good things available to read.

I didn’t know the story of the song “Finlandia,” but Terez Rose at The Imaginative Conservative tells it. And it includes a video of a flash mob singing it (I recognized the music as the same for a hymn we sing at church).

And the photos: Tim Good takes a walk in the woods, Tom Darin Liskey takes a walk in Oxford, and the Gentle Author at Spitalfields Life finds the winter light (we’ve walked some of those streets – I recognized them.)

And there’s L.L. Barkat on encouraging a love for poetry, some London “scraps” from the 1880s, a plea for magnanimity, some beautiful original music called “Passing Shadows,” and more.

A Quick and Dirty Guide to the Middle Ages – Bradley Birzer at The Imaginative Conservative.

Why the Prosperity Gospel is So Harmful – Dr. Andrew Spencer at The Institute for Faith, Work, & Economics.

How Advent Saved Christmas for Me – Paul Grodell.

We Need More People with the Humility of Joseph – Zak Schmoll at Entering the Public Square.

Advent – The Act of Waiting – Robert Rife at All Nine.

Dealing with Sexual Abuse as the Church – Jared Olivetti at Gentle Reformation.

Sibelius, “Finlandia,” and the Cry of Freedom – Terez Rose at The Imaginative Conservative.

In the Woods – Tim Good.

The Illusionist by Michael Shewmaker – Brian Brodeur at How a Poem Happens.

Encouraging a Love of Poetry – L.L. Barkat at Edutopia.

My Cries of London Scraps – The Gentle Author at Spitalfields Life.

Magnanimity: The Balm for Our Brutalized Public Discourse – Stephen Klugewics at The Imaginative Conservative.

Opinion Polls and the ‘Evangelical’ Illusion – Thomas Kidd at The Gospel Coalition.

A Historian’s 5 Tips on Writing – Justin Taylor at The Gospel Coalition.