“The Crusades” by Thomas Asbridge 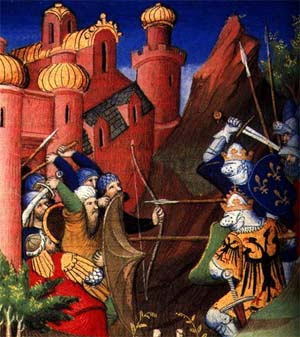 It’s fascinating that something that ended 800 years ago still manages to find its way into contemporary political and social issues. But in many ways, we are still arguing about the period of the Crusades (1096-1271 A.D.). Depending upon our largely ideological perspective, the Crusades were either a military effort to win back the Holy Land for Christendom, or a major effort mounted by the imperialist West to contain and control Islam. That’s an oversimplification, of course, but it does point to how interpretations of history have become hostage to political ideology.

To sort through the politics surrounding the Crusades, it’s helpful to take an in-depth look at what actually happened. This is the task historian Thomas Asbridge takes upon himself in The Crusades: The Authoritative History of the War for the Holy Land (2011). And it’s no surprise that what happened is far more complex that contemporary political understanding acknowledges. 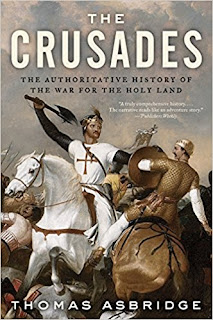 And what Asbridge provides in indeed an authoritative, in-depth, and highly detailed account of the four crusades, what sparked them, what happened, and how the forces of Islam responded. While significant differences existed for each of the four (and the failed Children’s Crusade), they did share certain common characteristics:

·     The Roman Catholic Church and the pope played significant roles.
·     Crusade leaders’ desire for fame and renown, not to mention territory, likely matched the religious fervor that propelled each of the four crusades.
·     Islam had historically been a geopolitical threat. Islamic forces had been defeated at Tours in France in 732 A.D. and remained a constantly encroaching threat to the Byzantine Empire.
·     Islam was far from a monolith. It was often as fractured and disunited as the crusader forces themselves, and various Islamic rulers and commanders had no problem often working for and against the Crusaders.
·     The Byzantine Empire, with good reason, had as much concern with the crusaders as it did with Islamic powers. It, too, was not above playing both ends against the middle, if it saw a benefit for itself.
·     The territory conquered by the crusaders varied greatly over the 200 years of crusade history, waxing and waning to a remarkable degree.
·     Many, if not all, crusaders had a genuine belief in regaining the Holy Land, and especially Jerusalem, for Christianity.

In the end, the crusaders retreated; the Holy Land once again remained under Islamic control until the British Mandate for Palestine following World War I.

The Crusades tells a comprehensive story of a tumultuous period in European and Middle Eastern history. It was not the almost cartoon-like story we hear today. Instead, it was a series of complex developments fueled on both sides by religious fervor and individual ambition.

Top illustration: The King of France and the Holy Roman Emperor fighting Saracens.
Posted by Glynn at 5:00 AM

I have never been interested in this period of history but after reading this review my interest in piqued. I'll have to check with the local library to see if they have a copy of this.