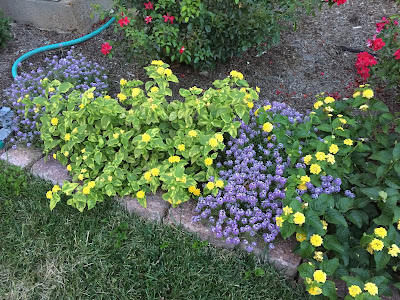 Forty-nine years ago: I stood
and sat on the university’s
parade ground to listen
to speeches and presentations
and wander around booths
and demonstrations.
What I remember: the sunburn.

Forty-nine years later: my patch
of earth is about a quarter acre
leveled down six feet to solid clay
(with zero organic matter)
and first called a lot, then gradually
changed with mulch and leaves
and organic stuff and topsoil and
cow manure and various additions
to manage the pH. Slowly it all
reassembled itself into soil.

Except for dogwoods.
I killed more dogwoods than
I could count and finally gave up,
content to watch the neighbor’s dogwood
flourish across the street.

Clay became soil became gardens and
grass, which retreated as gardens grew.
Of the 63 rose bushes, four survived
rose rosette disease. Bulbs came and
went; some stayed, bless their hearts.
Somewhere along the way I fell in love
with coleus and hostas, annual and
perennial.

What I learned: taking care
of your quarter acre is hard work,
not unlike taking care of earth.
What I also learned: you have
to keep at it, over and over and
over.

During April, the editors of Tweetspeak Poetry have been hosting a 30-Day, 30-Poem Challenge for Earth Month entitled, appropriately enough, Poetic Earth Month. Today, the featured (and final) poem is an excerpt from Neruda’s Memoirs: Poems by Maureen Doallas. The poetry prompt is to wrote a poem about the making of you as a poet who cares about earth, self, and others.
Posted by Glynn at 10:28 AM

" What I learned: taking care
of your quarter acre is hard work,
not unlike taking care of earth.
What I also learned: you have
to keep at it, over and over and
over."