"Death the Halls" by Adam Blumer 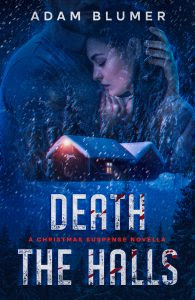 This is one Christmas that doesn’t go exactly as planned.

Lauren Henry is arriving at her family’s cabin, preparing to celebrate Christmas.

With her are her mother and grandmother; Lauren and her grandmother are barely on speaking terms after a spat. Soon to arrive are Lauren’s father and her boyfriend, veterinarian James Coleman, who’s meeting the family for the first time.

At the cabin, the three women discover intruders. Within minutes, Lauren’s mother and grandmother are lying on the kitchen floor, shot and presumably dead, while Lauren is speeding down the mountain on a snowmobile, a killer’s arms holding on to her waist. And the man claims to be her brother.

Death the Halls by Adam Blumer is a Christmas novella that you don’t want to start reading as you prepare to go to bed. You’ll want to find out what happens next, and so you keep reading.

And you just may get yourself wired enough to have a sleepless night.

Adam is the author of Fatal Illusions, The Tenth Plague, and Kill Order. A print journalism major in college, he works as a novelist and freelance writer and editor after serving in editorial roles for publishers more than 20 years. He was the editor for my first two novels, Dancing Priest and A Light Shining. Adam lives in Michigan’s Upper Peninsula with his family.

Death the Halls has a bit of romance in it, but it is more a combined thrilled and mystery. It may not get you into the Christmas spirit, but it’s definitely an entertaining read.

Talking about The Tenth Plague.

Thank you so much! I appreciate it.