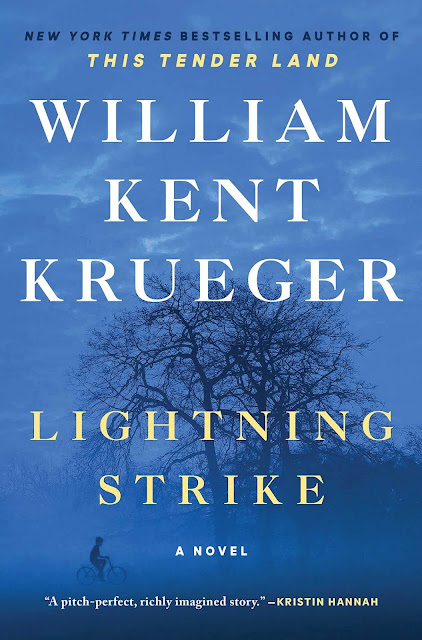 During a planned hike aimed at a Boy Scout merit badge, Cork and his best friend Jorge find a gruesome sight. In a well-known part of the Aurora, Minnesota, region where they live, a family friend and Ojibwe, Big John Manyworks, is hanging from a tree, an apparent suicide. Despite his troubled past, Big John didn’t seem the type to kill himself, but the evidence looks conclusive. Cork, however, is not convinced, and twice he sees a giant, menacing shadow that he believes is the spirit of Big John.

Cork’s father Liam undertakes an investigation. It still looks like suicide, but there are too many questions going unanswered. Gradually, Liam, with more than a little help from his son, discovers what wasn’t suicide at all but murder. And suspects abound: Big John’s half-brother Oscar; the richest man in town who owns the iron mine; and others. Cork takes counsel with an Ojibwe elder, who tells him to follow the crumbs. And it will lead Cork and friends right into deadly danger.

Krueger’s Cork O’Connor novels are all set in the North Woods of Minnesota. He’s also published three standalone novels: Ordinary Grace, The Devil’s Bed, and This Tender Land. He’s received a number of awards and recognitions, including the Minnesota Book Award, the Loft-McKnight Fiction Award, the Anthony Award, the Barry Award, the Dilys Award, the Friends of American Writers Prize, and the Edgar Award from the Mystery Writers of America. His last nine novels were all New York Times bestsellers. Krueger lives in St. Paul, Minnesota.

Lightning Strike deftly combines the conflict between white and Ojibwe cultures, the suspicions and mistrust of reservation people (including Liam’s own mother-in-law), a mystery of a staged suicide and a missing teenager, and the times of the early 1960s to create an intriguing, engrossing story.