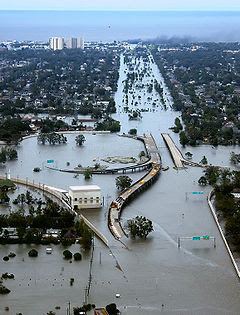 I’m originally from New Orleans, a Nawlins boy born and raised. But I haven’t lived there since I graduated from college, and that was…a long time ago. But my mother still lives there, in the same house since 1956; my older brother lives in what is now a northern suburb across Lake Pontchartrain; and I have relatives all over the city.

In late August of 2005, I was at a school function for parents. And I was thankful that New Orleans had been largely spared from the ravages of Hurricane Katrina, particularly since my then-82-year-old mother and her older sister had refused to evacuate and decided to stay together in my mother’s house. I was listening to a presentation when my BlackBerry buzzed with a message from my younger brother, who lives in Houston. This is what the message said: “The levee on the 17th Street Canal has been breached. There are also reports that the London Avenue Canal has been breached.”

I knew exactly what that message meant. Exactly. New Orleans was flooding. The city had not been spared. It was everyone’s worst fears realized. The 17th Street Canal was a border between New Orleans and suburban Metairie, and it meant that some of the wealthiest parts of the metro area were flooding. The London Avenue Canal bordered the Ninth Ward, and it meant that some of the poorest sections of the city were flooding.

Then another message from my brother: the St. Charles Parish levee on Lake Pontchartrain had been breached. I knew what that one meant, too. The airport runways were going to flood. And possibly my mother’s house, which had survived every hurricane large and small for the previous 50 years without a drop of water inside the house.

The next five days were a nightmare. And my company, my Fortune 500 company that many people love to hate, demonstrated a depth of corporate and individual compassion that still amazes me.

The company has a large manufacturing plant on the river between Baton Rouge and New Orleans. The plant had done a phenomenal job of shutting down and protecting the facility before Katrina arrived. But a third of the plant’s employees – more than 200 people – lost their homes because of Katrina. They had no place to live, not even with relatives because a lot of their relatives were in the same predicament. So the company brought in trailers for all of the employees and their families. A fund was created for employees to contribute to help those who had lost their homes. The company made a large and generous donation to the Red Cross for relief efforts. And employees from the manufacturing plant who had boats became part of the rescue flotilla, pulling people from atop flooded homes and buildings.

And then there was me, a total basket case trying to figure out how to get my mother and aunt out of the city. Miraculously, while she lost electricity (normal for a hurricane) and water (not normal; water pipes had broken everywhere), she still had phone service (erratic but she had it) and her house did not flood. The flooding stopped a few blocks away. That week, my boss let me work the internet and the phone to get them out of there, track down other family members (scattered from Florida to Texas and as far north as Ohio) and become a mini-information center for people trying to find family and friends. I didn’t do one lick of company work that week, but I worked 12 to 14 hours a day.

We got them out; a neighbor who had evacuated to Lafayette snuck past the military and police roadblocks to check on his house. He took my mother and aunt to my nephew’s house in Lafayette, and my brother eventually got them to Houston.

And my company, well, my company demonstrated its compassion and generosity. It’s a side most people don’t see – the side that sent donations and resources when tsunamis hit southern Asia, when Hurricane Katrina devastated New Orleans and the Mississippi Gulf Coast, and when the earthquakes struck Haiti and Chile. It’s what the company does.

(Over at the High Callings Blogs, we’re discussing John D. Beckett’s Loving Mondays: Succeeding in Business Without Selling Your Soul. The discussion is led by Laura Boggess. This week, we’re focused on chapters 15 through 17, covering the ideas of the compassionate enterprise, extraordinary service and giving something back. Check here for last week’s discussion.)

Join today's discussion at HCB: What I Hold in My Hands.

L.L. Barkat at Seedlings in Stone: You a Philanthropist?

A Different Story: Risky Business
Posted by Glynn at 5:22 AM

A breathtaking story, Glynn. I can't imagine how it must have felt, wondering and worrying about your aunt and mother. In times of trouble, we find out what really matters--to people, and to companies I suppose. I'm glad yours showed such good stuff.

G...Your story is amazing. What a heart-wrenching few days you had.

I too am amazed at the reaction of Americans -- and America companies. We villify our profit machines so much that we don't see the truly good things they do.

Incredible times. And these are the ways that businesses can support their employees, isn't it? No front page news, but quietly letting folks do the most important thing at the time.

I wonder why we love to hate companies like this? What breaks down there? On whose side?

(Had an interesting conversation with a Novartis employee on my last flight about similar issues.)

thank you for sharing a side of the story we don't often hear ...

What a horrible time. Thankfully all was as well as it could be in the end. I tend to get a little upset at the fault of society not to give big business their dues when they do something right and good, too. They're the perfect whipping boys when something goes wrong. They're also the ones many turn to first to help make them right again.

Thanks for sharing that Glynn. I'm glad your family was ok. That's also good to hear about your company. Billy is right. Companies are easy to blame, but a lot of them do some good work that people would really miss if they stopped.