A Breath Surrounded by Eternity

Last Saturday, my wife and I visited the Marianist Art Gallery in our own town of Kirkwood. It’s on the campus on St. John Vianney High School, and is largely devoted to the art and sculpture of Brother Mel Meyer. On Sunday after church, we went to the St. Louis University Art Museum, which I having an exhibition of Brother Mel’s works. And it is a wonderful exhibition.

I wrote about our meeting Brother Mel in 2010. I have two of his small metal sculptures in our office at home – Jesus on the Cross and The Last Supper. 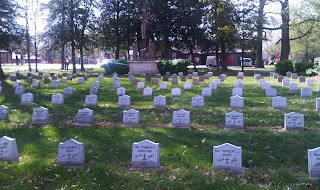 After wandering around the Marianist gallery, we went outside – to see what I had spotted when we were getting out of the yard – rows of small tombstones. I had never noticed it before. It turned out to be the final resting place of Marianist brothers and priests. The tombstones are identical in shape and size, but some are much older and weather-worn – the oldest birth date I saw was 1849; the most recent burial had been in 2011. Irish and German names abounded, reflecting two of the three major streams of immigrants who settled in St. Louis (the third being Italian).

It’s a quiet place, shaded by trees, with a sculpture of Jesus on the cross behind the tombstones (if you squint you can see the sculpture in the photograph above – I have never claimed to be an ace photographer, especially with a cell phone). 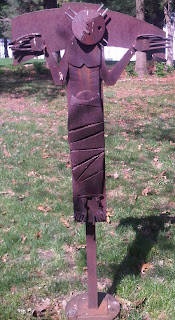 Surrounding the graveyard in a semi-circle are metal sculptures by Brother Mel – representing the stations of the cross. Benches are available for praying and meditating, or just sitting. A soft breeze was blowing as I walked the rows of graves, wondering at how each of these men had given their lives to their vocation. I only had to look at the semi-circle of sculptures to find the answer for why they did.

In that graveyard, feeling the warm wind, looking at the tombstones laid out so neatly and orderly, studying the sculptures, and above all listening to the quiet, it was so clear that we are but a breath upon the landscape, a breath surrounded by eternity.
Posted by Glynn at 9:19 AM

Mister Glynn, that last paragraph is something of beauty and Truth... wow.

I love old graveyards. Something so humbling about them. And yes, a reminder of being a breath away from joining in the multitude. So enjoyed this, Glynn!

When I clicked on the photo, it enlarged it and I could see the sculpture quite well. A powerful scene in its simplicity.

Cemeteries can bear such a powerful witness, I think, to biblical truth and the hope of the resurrection. It seems fewer churches these days have graveyards on their property, and I think that's a shame. For many of the reasons you list in your final paragraph, I think tomb stones preach just as loudly as a sermon from a pulpit.

I have found that the Stations of the Cross provide endless opportunities for art. This is one of them.