There is a scene in the Anglo-Saxon poem Beowulf where the hero emerges from the swampy lake with the head of Grendl’s mother. His own sword being found useless, he first fights with his bare hands, and then discovers a sword in her lair, “an ancient heirloom from the days of the giants.” With this sword he slays the monster and cuts off her head and the head from Grendl’s corpse. But then he sees that the sword has been dissolved by her blood, leaving only the hilt.

David Whyte, in The Heart Aroused: Poetry and the Preservation of the Corporate Soul in America, says this dissolved sword signifies two things. 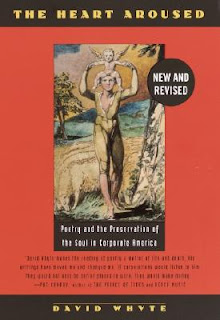 First, that “as the enemy that has frightened us melts away, so does the requisite need for the weapon of attack.” It’s as if the weapon can be used once, and then it’s no longer needed; other battles will have to be fought with other weapons.

And second, that “we can never ultimately show to others exactly how we slew the monster.” We can tell the story, we can create elaborate accounts (like Beowulf) to try to describe what happened, but the battle with our individual monsters can really only be fought by ourselves. This may be the underlying reason by Beowulf fights Grendl and his mother by himself, while other warriors wait nearby (of course, it could be, too, that they were cowards.)

And then there’s the scene at the end, where the aged Beowulf fights one more battle, his last, with a dragon. He succeeds, and kills the beast, but he’s mortally wounded. This time, one young warrior, named Wiglaf, stands with him, while the others hide in the woods.

I find a strange kind of resonance with the scenes in the poem.

For some time, I’ve been regularly talking with a friend about an array of human issues – dealing with anger, how much we are shaped by our parents, how you recognize and break out of patterns of behavior – in short, how to heal your heart. After a considerable period of regular conversations, he told me that I was guarding my heart, that the defenses were significant, and that I needed to find a way to tear the defenses down and become more vulnerable.

To use literary terms, he was suggesting that I had to plunge into that lake and battle with Grendl and possibly Grendl’s mother. No one could tell me exactly how to do this; no one could arm me with the weapons that would be successful. Or perhaps it’s that dragon, and there is no guarantee of success or of escaping with some mortal or even temporal wound.

I think of Jesus in the Garden of Gethsemane. He knows what he faces; he knows what he is about to plunge into and what is going to happen. His friends can’t even stay awake to pray with him, and before the night is over they will have all abandoned him.

Even when the hotheaded Peter raises his sword and strikes the servant, Jesus does something remarkable – he heals the servant’s ear. It is his last miracle before he dies, and he exhibits a tender vulnerability.

Is that the kind of vulnerability that is being asked of me? Is this what is needed to break down the guarded defenses and heal my heart, this tenderness, this vulnerability in the midst of upheaval, betrayal and certain death?

I suspect I know the answer.

We’re discussing A Heart Aroused at TweetSpeak Poetry. The links went live yesterday, and I likely went overboard a bit by having three posts on what’s covered in the two chapters being discussed this week. I’ve had the book since it was published in 1994, read it and reread it, and referred to it numerous times in the succeeding 18 years. Among a handful of books I can name, it’s become a part of who I am.

This post is also submitted to Bonnie Gray's blog carnival at Faith Barista, where the prompt is "a heart-healing moment."

I think one part of becoming vulnerable requires identifying what we fear; another part is allowing ourselves to trust the one with whom we share our vulnerability. What we experience of either affects how willing we are to do both.

I've often thought of the Peter/ear/sword occasion as the Peter Principle although I know the true Peter Principle is based on something else. How often in our misunderstanding, defensiveness, and fear we strike out. What an example Jesus' response was.

plunge into that lake.

Reminds me a little of Sarah Elwell's "watermark" poem the other day at 'Every Day Poems'! :)