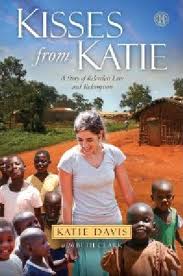 In Kisses from Katie: A Story of Relentless Love and Redemption, we’ve reached the chapter where Katie Davis is coming to understand that the United Stated States and Uganda represents two points on the continuum of her life, that as wildly different as the two countries, societies and cultures are, they exist on the same planet, and here may be “connectedness” than she has realized.

Oddly enough, I found this chapter the most encouraging so far in the book. Something is changing, and the something is primarily within Katie. The slightly condescending tone which had accompanied much of her attitude towards her home country (and, by extension, her family and friends) is disappearing. A maturing process is underway, and Katie is coming to understand her place, and her calling, within both societies.

We are all witnesses, and we are all missionaries, whether it’s an Ugandan village or a Fortune 500 company. The spiritual needs are the same. One is not a “holier” calling than the other; one is not “more sacred.” It is all God’s work, and wherever we are working, that’s our mission field.

This is the underlying idea for The High Calling, where I’m a contributing editor and part of the social media tweet (I’d like to have a bumper sticker that reads “I tweet for THC”). The “high calling” of the name is the high calling of our daily work, wherever and whatever that work is, because all work is a high calling. If we’re working in a hospital, a company, a government office, as an independent contractor or in a missionary outpost, God sees all of us as engaged in a high calling.

In other words, we don’t park our faith at the office door. It doesn’t mean we actively evangelize and pass our tracts; it does mean that we live our work so that people see Christ in us.

It’s no secret that many, perhaps most Christians see pastors and missionaries as doing work that is “higher” than what the rest of us do. Both of those callings requires sacrifices, and likely greater sacrifices than what most of us are familiar with. But that doesn’t mean they’re “higher.”

This separation into sacred and secular is actually a product of modernism – the same impulse and thought that became “separation of church and state” (which a lot of people really define as “elimination of any possible influence of the church in society.” The difference for us is that this belief in sacred and secular separates our very selves. We have a sacred self (the Christian, church-going, mission-minded part) and we have a secular self (work, school, culture, and anything “non-church”). It’s a false dichotomy, more akin to Greek philosophy and some of the famous heresies that stalked and almost destroyed the early church.

Katie is learning an important lesson: we are to do what we are called by God to do wherever he plants us. And if He plants you in an Ugandan village, it may mean that economic and basic health needs are greater than the society you left behind, but the spiritual needs are the same.

Jason Stasyszen and Sarah Salter have been leading us in a discussion of Kisses from Katie. To see more posts on this chapter, please visit Jason’s site, Connecting to Impact.
Posted by Glynn at 7:00 AM

It's always astounded me that people view the separation of church and state as meaning that the church should have no influence in society beyond its confines.

What separation of church and state is intended to do is to protect the Lordship of Christ in and over the church, by standing against interference in the life of the church by any other authority, e.g. kings, presidents, governments, political parties, single issue pressure groups etc.

As to the sacred/secular divide - if "the earth is the Lord's and everything in it" then there is no secular at all.

Amen! Wherever we go that's where we're called to minister. Jesus said it's the meek that will inherit the earth.

i agree in that no matter where we are, that God wants us all to do two basic things.

I agree with you, Glynn. I believe some of the statements and thoughts Katie conveyed in earlier chapters were a product of youth (and possibly some misunderstanding of theology). Kudos to her for not "correcting" it but portraying it how she really thought and felt it. It shows the transformation that takes place. Of course, she may waffle back to the other side some as well, but that's our human nature at work.

Glad my work as web designer is just as important and glorifying to God as my work as a pastor. The connections to the divine are really there if we'll see them. Thanks Glynn.

I have thoroughly enjoyed your analyses of Katie's book, Glynn And I'm glad to see today's post, and to find that she moves from her early youthful feelings of superiority to a more inclusive understanding of the truths you so beautifully outline here. I've done both - been a stay-at-home mom, run my own small business, worked part time for a movie producer - and I've been a pastor. ALL of it is ministry simply because I claim Jesus Christ as the one I follow. That's why I enjoy THC and why I always appreciate your comments on this topic.