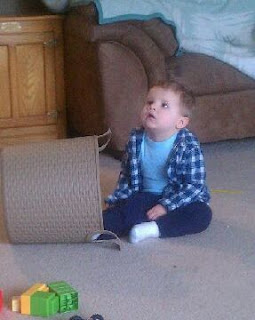 It doesn’t matter whether we go to his house or he comes to ours. Our grandson Cameron has learned to connect his grandparents with some fairly definitive things.

One is dancing. My wife has a CD of children’s songs by Chad Stuart called “Don’t Argue with an Elephant.” As soon as Cameron spots my wife or me, he runs for the CD player, and bounces up and down until we turn it on. Then we dance.

A second connection he makes with us has to with books. He loves being read to. One of his favorite books is Five Little Monkeys. There are several others. He loves hearing the stories read aloud, over and over again. And his grandparents are only too happy to oblige.

A third connection is blocks and Legos. The two of us build stuff – mostly towers. And we see how many blocks we can place on our heads. Cameron likes to knock the towers down, so we can build them anew.

What these three activities – dancing, reading and building – have in common is that Cameron gets our undivided attention.

This past Sunday, we went over to my son and daughter-in-law’s house for an hour, to drop off my son’s birthday present. Cameron was getting better from a bout of respiratory crud, but he perked right up when we walked in the door. He grabbed my hand, walked me to the pile of blocks and Legos, and pointed.

He trusted his grandfather enough to know that I would immediately sit down and start building a tower.

He’s learned that his father is already ready to play and horse around, and that his mother is there to hold him when he’s sick. His grandmother will always have cherry tomatoes stashed away (Cameron loves cherry tomatoes. And salad.) His grandfather packs a BlackBerry in a holster, and Cameron always wants to see it, because the wallpaper on it is a picture of – Cameron.

In short, this little boy who’s almost two has learned he’s surrounded by love. He has his moments of unloveability like we all do, but he knows that regardless of what he does, he’s loved.

He has that’s child’s heart that’s full of trust based upon consistent love.

Is it any wonder that Jesus said “let the little children come to me?” Is it any surprise that it’s the kind of heart – a child’s heart – that he wants all of us to have? It’s not that our hearts are pure and good. He knows better.

But it is that our hearts are full of trust for Him, because we know better.

Photograph: Cameron Young watching Monsters Inc. on television, by Stephanie Young. Notice the blocks in the foreground.
Posted by Glynn at 5:00 AM

You caught this so beautifully Glynn. Cameron is so blessed to have such wonderful grandparents.

So beautiful Glynn! I really love reading your blogs. I am going to share it with my sister-in-law who just welcomed her first grand baby into the world. David after his grandfather (my brother)... Would have been Dad's first great grandchild. I can just see him in Heaven with a giant grin on his face. He well understood how to love a child unconditionally!

Glynn, so, so precious. We have a 2 1/2 year old grandson, also a fan of Monsters, Inc.
My Paul Silas loves his Nana, but who does he run to when we come to visit? His grandpa....there's nothing like it.
Thank you for sharing.

oh for all hearts to know the way...

Yes. What nance said -- for all hearts to know the way.

i went out today to run a few errands. i also ate a burgerville burger in the car.

When i stopped at the next place there were sesame seeds on my car seat, so i picked them up with my fingernails and tossed them onto the blacktop.

Babies and toddlers sure are good at making connections quickly, aren't they? My son signs "more" (for food) right after he sees his grandma... evidently being around his grandma means he must eat!

And yes even more to that trust. My kids amaze me with their immediate trust in us as their parents and in their plentiful love. Great post, Glynn.

Yes, when you look at children and their delight in those who give them love -- that's what our Master wants from us.

All of this was precious.

I smile when I think of you, once bent over with back pain, dancing with a precious two year old, one who's captivated your heart.