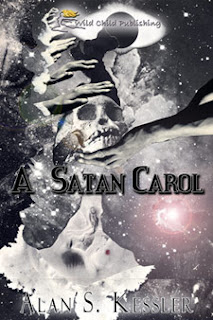 This is likely the most bizarre novel I’ve every read. I think I mean that in a good way.

Mr. Green, the main character in The Satan Carol by Alan Kessler, is quite a busy guy. He’s arranging for a new world, with himself at the steering wheel. It’s taking a lot of time, and a lot of orchestration, but he’s patient – he’s willing to wait for generations – and he’s lining up a cast of helpers, many of whom don’t realize what it is he’s actually up to. Mr. Green is also understanding, kind, and willing to help people in difficult situations.

To make his new world, Mr. Green needs a soul for his son, and not just any soul, but one called the Golden Soul, which last inhabited a young Irish boy who died in the potato famine in the 1840s. But the Golden Soul is less interested in Mr. Green’s son and more interested in the unborn child being carried by a 14-year-old girl. Mr. Green has a solution for that; it’s called abortion.

A Satan Carol tells the story of Mr. Green and the characters he brings together to achieve his plan for a new world. It is a story that is part fantasy, part contemporary novel, part science fiction, and part allegory. It is in turn violent, profane, funny, hideous and shocking, all of the things you would expect Satan to be (and the language and some of the scenes can be graphic at times).

But Kessler keeps it from sinking into parody or satire by grounding the story in what is an orthodox understanding of who Satan is and what he represents, including the limits he operates within – and what stands to frustrate his plans. What is particularly appealing is that there is no “superhero” who will do battle with Mr. Green, but instead a severely dysfunctional, messed up and broken family.

The Satan Carol is an amazing story – and a wildly imaginative read.
Posted by Glynn at 5:00 AM

Sounds like an awesome read! Thanks for sharing your thoughts on this book.
Blessings!

Sounds fascinating Glynn -- now, to see if my 'reading pile' will stay stable if I add one more to it!!!