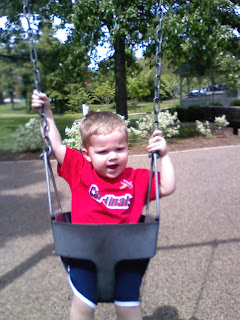 Yes, that is my grandson Cameron in the photo above, taken by his grandmother on Wednesday in a small park behind the city hall of the little suburb where we live. They had had lunch, discovered a fountain, and then wandered over to the park. He wasn’t too sure about what was going on, until he saw the slide. And then he knew. He also discovered the swing.

We’re on the verge of having two of these characters. It’s wonderful.

I’ve been reading the Collected Poems of R.S. Thomas 1945-1990. Thomas was an Anglican priest whose parish was in Wales. He was also a prolific poet, and if I’m reading him correctly, he really didn’t think too highly of his parishioners at the beginning. But the poems do change and soften.

Coming up on the “finished reading/books to review” list are Tripp York’s The Devil Wears Nada (I love the title) and You and Three Others Are Approaching a Lake: Poems by Anna Moschovakis (I like that title, too). Coming up on the “to read” list are Travis Thrasher’s novel Temptation, Dale Cramer’s novel The Captive Heart, Shawn Smucker’s Building a Life Out of Words, Joel Jacobson’s Water the Mud and C.S. Lakin’s The Unraveling of Wentwater.

We’ve been watching the flowers in the front of our house with some sense of awe. Last fall, we had winter non-hardy pansies planted about a small maple tree. The winter was extraordinarily mild, and the non-hardy pansies survived and have been doing quite well, thank you. It’s been a strange spring overall – an unusually warm March when everything bloomed early, roses in April instead of May, a lot of the bulbs coming up on schedule but confusing everybody.

I got another bike ride in on Wednesday night – my third this year. I’m riding my hybrid instead of the road bike – you lean forward less on a hybrid – but the therapist has said I can start easing into the road bike when I’m ready. I have to smile to think that 20 miles on the bike used to be a typical first half or first third of my ride; and then I remember last August, when the only comfortable position for my back was flat on the floor, and the pain was excruciating. Yeah, I’m not where I used to be, but I am vastly better than I was last summer.

I’ve talked about my writing on other posts, and there’s nothing new to add. I did have a young colleague from another team at work come into my office yesterday and say he’d finished reading Dancing Priest, and that he thoroughly enjoyed it. He asked all kinds of questions about how long it took to write, about the characters, about the sequel – he was truly interested. For some reason, it always surprises me when people show this kind of interest.

Of course, I’m always glad to talk about it.

Glynn. I glad to hear that you are back to biking a little. It has to be exhilerating after your back problems and is a real answer to many prayers

My contribution to gardening this year is to remove all the dandelions. We refuse to allow the HOA to put chemicals on our lawn. I found it difficult to stand up straight after that. I hope you have a gardener to do the planting, it's so hard on the back!

Have a wonderful weekend!

I love having this glimpse into your life.

It makes you less of a writer and more of a human.

Pleasantly disturbed in your life creates pleasant ripples in mine!

Oh my, I could buzzard-pick your brain for hours on end. I reckon I'm the buzzard in that scenario.

just make sure that the expectant daddy wears a helmet, or have someone stand guard behind him...in the delivery room.

glad to hear that you have been on your bike a couple more times.