The Kindness of the Trees in the Garden 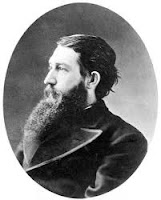 He fought for the losing side in the Civil War; he spent part of the war in a Union prison camp where he contracted the tuberculosis that would eventually kill him. But poet Sidney Lanier is considered by scholars to be of similar importance to 19th century American poetry as Walt Whitman, Emily Dickenson and Herman Melville.

And one of the poem he write is appropriate for Holy Week. To continue reading, please see my post at The Master’s Artist.
Posted by Glynn at 11:00 AM

Sydney Lanier was always on my syllabus... his "Song of the Chattahoochee" always included in the syllabus...

only the students with a musical background or a love of poetry appreciated him -- the others were "eh"...

He should have resonated with them -- they live in the midst of what he wrote about...

I appreciated reading about him again from your post.