“So Many Christians, So Few Lions” 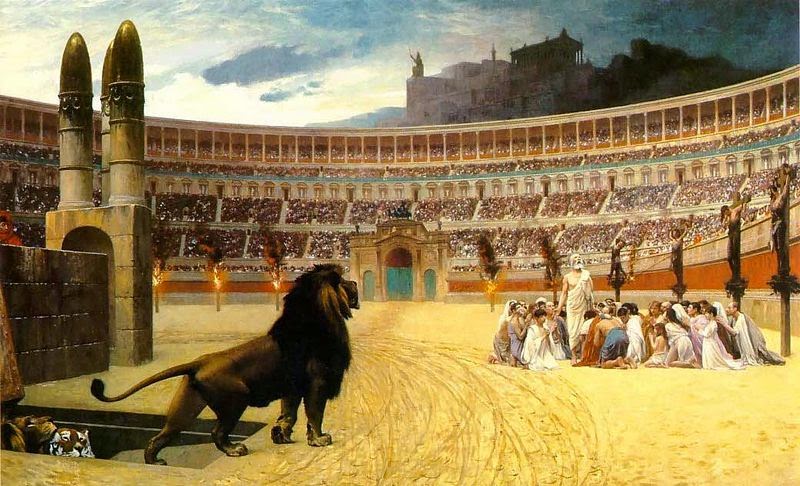 About 10 years ago, I was in my office at work, and a colleague came by to talk about a project. I don’t remember exactly what the project was about, but it did involve people who had been critical of the company and its products.

Then, out of the clear blue, my colleague said, “But you know who really frightens me?”

I shook my  head.

“Those Christians,” she replied, shuddering.

“Those Christians,” she nodded. “Those evangelicals. They scare me, always trying to force there views on us.”

Stunned, I sat for a moment without speaking.

She shook her head.

“I’m one of them,” I said. “One of those evangelical Christians. Do I try to force my views on you?”

It was her turn to be stunned. I could see cognitive dissonance exploding inside her head.

“Well,” she said finally, “if you are one of them, you must be the exception.”

It was my first experience of “Christianophobia” with a work colleague. I had experienced it before, something on the level of group hysteria, over a school district controversy. My colleague was college-educated, older than I was by a few years, with a journalism background.

If you asked conservative Christians if there is Christianophobia in the United States, the likely response would be a rather large majority affirmative. The evidence has largely anecdotal – court decisions, stories of university political correctness run wild (lots of those), sneering editorials by the local newspaper, fundraising letters by organizations like People for the American Way.

All anecdotal, until So Many Christians, Do Few Lions: Is There Christianophobia in the United States? by George Yancey and David Williamson. The authors are sociology professors at the University of North Texas, a public university (not religious) in the Dallas-Fort Worth area.

The book, while more engaging than the typical sociology book, is still a sociology text. Yancey and Wiliamson don’t sensationalize their subject or write in screaming prose. You have to read slowly and deliberately. The appendices comprise about half the volume.

They make their case. Using existing surveys plus ones they themselves conducted, they make a solid case that there is indeed Christianophobia in the United States, and especially among a rather elite group – highly educated, relatively wealthy whites. In overall size, they would be smaller than the conservative Christians they fear. In influence, position, and power, however, they’ve got it all over the Christians.

In terms of what has been happening culturally in the United States, this is an important subject to consider and discuss. And I will be discussing key parts of the book over the next two to three Mondays – who are the people so afraid of conservative Christians; why do they believe what they do; how do they rationalize what would otherwise be considered intolerant, bigoted beliefs; and what the implications might be.

I do know that my work colleague who so feared “those Christians” fit almost exactly the demographic described by Yancey and Williamson. And that happened a decade ago.

The situation has not improved since then.

Painting: The Christian Martyrs Last Prayer, oil on canvas by Jean-Leon Gerome (1883); the Walters Art Museum, Baltimore.
Posted by Glynn at 5:00 AM

Thanks for covering this, Glynn--it sounds fascinating. I'm looking forward to the remaining installments.

Thanks for taking on this subject. Just last night our little village had a concert--Christian concert. The place was packed. The singers, local residents of the park, were excellent. I was standing neart the back door. I smiled at Bob as he walked out the door, he gave me a frown.
Later I noticed Bob talking with Jim on a bench outside the clubhouse door.
He told me he didn't see why they (those Christians) had to turn the clubhouse into a church. "There's plenty of churches everywhere, why do they gotta go an bring it here?"

I've got a new name on my prayer list.

We are a scary bunch......it's interesting, my prayer time this morning was centered about meditating on what's happening in the world and how the American church might be affected now and in the future! Timely.

As a conservative, evangelical Christian, I'm looking forward to reading your thoughts on this, Glynn.

Glynn, my teenage kids and I have been discussing the subject of Christians in the United States fast becoming a minority. I have no data for that, but it sure 'feels' like the scales are tipping due to the Christianophobia you mention. Seems all of those open-minded people are only open to everything OTHER than Christianity. Hmmm.

well, even though the title gives me the shivers, i'm interested in your take on the book…