The Hiding Place: Childhood as Prequel 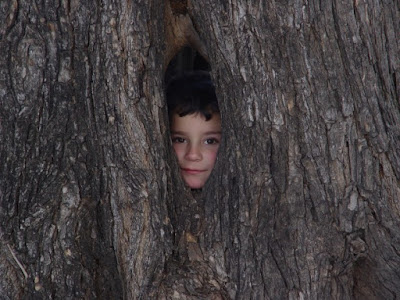 The retired couple next door to our duplex, giving the three-year-old me squares of Kraft fudge (I liked the vanilla flavor better than the chocolate).

My mother holding me as we watched the man from the dog pound take our Boston terrier away. He had mange, which at the time was incurable.

My father coming home from a business trip to New York, with a jack-in-the-box for me.

A vacation with extended family to Biloxi on the Mississippi Gulf Coast. The water tasted (and smelled) like rotten eggs.

Standing in line to get my polio vaccine – a red dot in a sugar cube.

These are some of memories I have from my first seven years of life. Most have to do with family. Our extended family, when it was fully extended, was large – my mother was one of six, and her oldest sister had seven children, so a great deal of my youth was spent going to weddings of what seemed like dozens of cousins. Of all of those weddings we went to, only one ended in divorce.

My father’s family was smaller – he was one of four (it had been five originally, but one sister died as a child). I had four cousins, all of whom were at least 12 years older than I was. For a long time, I was “the kid” on my father’s side of the family. And spoiled appropriately. 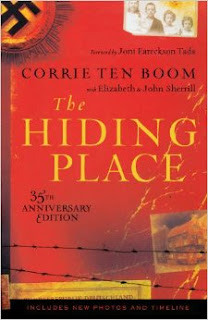 My memories of my father’s side are wrapped up in my grandmother – playing hymns on the upright piano, preparing to teach her Sunday School class, me feeding the sheep she kept in her backyard – and my aunts, especially the aunt who lived across the street from my grandmother who made world-class biscuits. And her husband, my uncle, who would let me sit beside him on the back step of the house while he aimed and fired his rifle at any cat that dared to come into his yard.

This was the uncle who introduced me to author James Mitchener. He insisted I had to read The Source, the longest book I had ever read up to that time. He loaned me his copy and said I could take it with me when I ended my Shreveport visit, as long as I returned it after I finished reading it. Which I did.

I was around my mother’s family far more, but it was my father’s family who influenced me the most, who left some of the deepest impressions.

This is what, I believe, Corrie Ten Boom has in mind in The Hiding Place, when she describes the home life she remembered as a child – the bedroom she shared with her sister, the aunts who lived with them, trips with her father to Amsterdam to meet with watchmakers, her first day of school (when she decided not to go).

In one respect, the childhood she remembered and cherished would not prepare her for the Nazi concentration camps – how could anything prepare a person for that horror?

But it another respect, her childhood did prepare her. Her childhood was where she learned the faith and values that would ultimately sustain her, even as she raved and ranted against God.

My heart leaps up when I behold
A rainbow in the sky:
So was it when my life began;
So is it now I am a man;
So be it when I shall grow old,
Or let me die!
The Child is father of the Man;
I could wish my days to be
Bound each to each by natural piety. (1802)

Led by Jason Stasyszen and Sarah Salter, we’ve been reading Corrie Ten Boom’s The Hiding Place. To see other posts on this chapter, “Full Table,” please visit Jason at Connecting to Impact.

Photograph by Gustavo Di Nucci via Public Domain Pictures. Used with permission.
Posted by Glynn at 5:00 AM

I'm amazed how my childhood prepared me in some things or how certain teachers or adults fostered things in me that I'm still using and growing in. We don't know what life has in store, but God will use everything as we trust Him. Thanks Glynn.