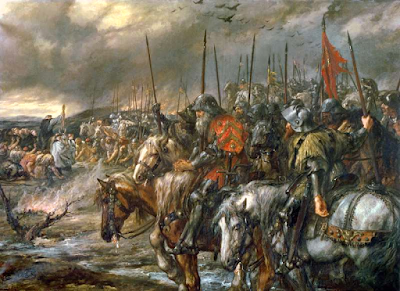 One thing we’ve learned about Britain – the British love celebrating anniversaries. (For whatever reason or reasons, the U.S. tends to be anti-historical.) Or perhaps they’re just better at marketing. This year is not only the 200th anniversary of the Battle of Waterloo, but also the 600th anniversary of the Battle of Agincourt. The Spectator published an article on Agincourt – noting that Shakespeare got it mostly right in Henry V.

Good photography and art this week, some good poetry. And a warning from The Jerusalem Post about what may happen as political correctness paralyzes Western governments.

And the ninth Planned Parenthood video was released by the Center for Medical Progress. Planned Parenthood says it doesn’t accept fees or payments for fetal parts procured from abortions. So what do you call “$60 per tissue specimen,” or does it depend upon your definition of the word “payment?”

The drama of St. Crispian’s Day – Shakespeare got it right – Allan Massie at The Spectator.

Amazon and the Limits of Consent – Charlie Clark at Fare Foreward.

Our World: Losing the War of Ideas – The Jerusalem Post.

Holy, the Lesser Saints – Jack Baumgartner at The School for the Transfer of Energy.

From the Roster: Yanina Shevchenko – Rebecca Locke at Curator Magazine.

The magnitude of an apology – Chris Galford at The Waking Den.

The Secret to a Happy Marriage – Shawn Smucker.

Death and Desire in the Shadows – Chris Yokel at The Rabbit Room.

How One Man’s Recovery from a Tragedy Revitalized a City – Chris Chancey at Faith, Work & Economics.

The Surprising Nature of Grief – Diana Trautwein at Just Wondering.

The 100 Best Novels Written in English – The Guardian.

Meet the Kindlepreneurs – India Sturgis at The Telegraph.

Thick Skin – The Key to a Writer’s Survival – Rachelle Gardner.

The Power of Pro-Life Women - Katelyn Beatty at Christianity Today.

Crime and Punishment - Sean Curnym at The Cinch Review.

We Few, We Happy Few

Kenneth Branagh, in the movie Henry V, speaking before the Battle of Agincourt.


Painting (top): The Morning of the Battle of Agincourt: The English Army at Prayer, by Sir John Gilbert (1884).
Posted by Glynn at 5:00 AM

Thanks for including me in the line up. Happy weekend Glynn...oh that's right, weekends are not a parenthesis when one is retired!

Glynn, the posts you've selected will help Christian Poets & Writers write well in all genres, so I'll highlight this on the blog - http://www.christianpoetsandwriters.com.

I am surprised and honored to be included here. Thank you.