How do you view sheep? 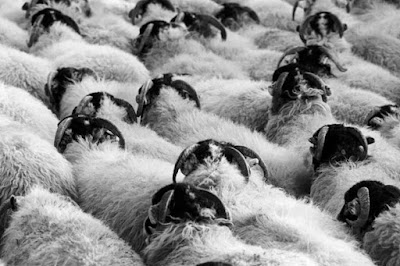 How do you view sheep, he asked?
I consider the sheep, a single sheep,
my grandmother kept fenced
on the back acre to avoid having
to pay to have the grass cut,
the sheep kept it mowed just fine
and a couple of times a year
the man would come to shear it,
he seemed to like the quality
of grass-fed wool. So I consider
the sheep, the sheep without
a shepherd, smelly, lost, rather
grotesque dirty sheep, wandering
without direction or purpose,
often biting each other and
everything else, and I think
that for these wretched sheep
his heart broke.

Loved this. Sometimes the appointed rounds are like eating the same patch of grass over and over. I'm glad the Shepherd hasn't lost sight of this dirty ole sheep. Shep? (sheep: singular sheep: plural hmmm why isn't sheeps?) English, go figure.

Have I ever talked about our pet Sport? He was one of twins that his mother rejected; we got him from U of Maryland. He was not the first sheep we owned as kids, but he had quite a personality (he ate the antique wicker carriage we used to push him in until he grew too big for it) and though a bit of a herbivore he preferred chicken and peas and an occasional cookie (he knew where they were kept). He also had a favorite place on the couch; woe be to the person who sat there (think, sheep backs up, begins run, and rams you in the kneecaps). We had him until I was a sophomore in college.

Sheep have a rep as not being too smart; Sport disproved that.