Where have all the pirates gone? 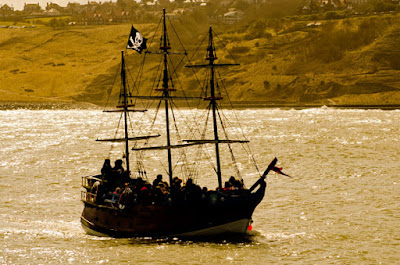 I went to Penzance, expectant,
but found only gift shops
and excursion boats.

I stopped at Neverland,
but the Captain had retired,
the croc ran a clock store,
and Peter was selling insurance.

I sailed to the Caribbean,
but Jack Sparrow had left,
some said to tend bar in Key West.

I flew to Panama,
to seek Drake’s coffin of lead,
but the birds of the sea were silent.

And no sign of Blackbeard’s head
by the Hampton River, or Mary Read’s
and Anne Bonney’s prison cells,
or Henry Morgan’s plantation in Jamaica,
or William Kidd’s three deaths by hanging.

Only the waves of the sea,
only the smell of salt in the air,
only faint echoes of yo-ho-ho
by boys chanting on Halloween,

and not even a bottle of rum.

Tweetspeak Poetry’s has a poetry prompt this week – and it’s about pirates. To see what others are saying and writing, please visit the site.

Photograph by George Hodan via Public Domain Pictures. Used with permission.
Posted by Glynn at 8:00 AM