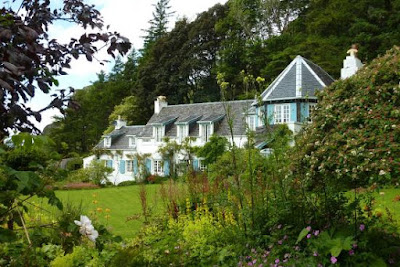 In my novel Dancing King, Michael and Sarah Kent-Hughes have something of a break from London, when they go to Scotland for Christmas (with a slight interruption with Michael’s sermon at Southwark Cathedralin London). It’s a relatively short part in the narrative, but two important things happen.

First, Michael has a conversation in the stable with his guardian father, Ian McLaren. Ian and his wife Iris were surprised – shocked is a better word – to discover they become the guardians of a six-year-old boy. Childless themselves, they raised him as their own child, and he still calls them “Ma and Da.” And Michael gets his degree from the University of Edinburgh, which is where he meets American exchange students and twins David and Sarah Hughes in the first novel in the series, Dancing Priest.

Photograph: An Cala in Scotland, the model for McLarens, the home of Michael Kent-Hughes’s guardians.
Posted by Glynn at 10:34 AM

Couldn't access the link to your Dancing Priest page, Glynn. :(

Sorry about that, Martha. I fixed it.