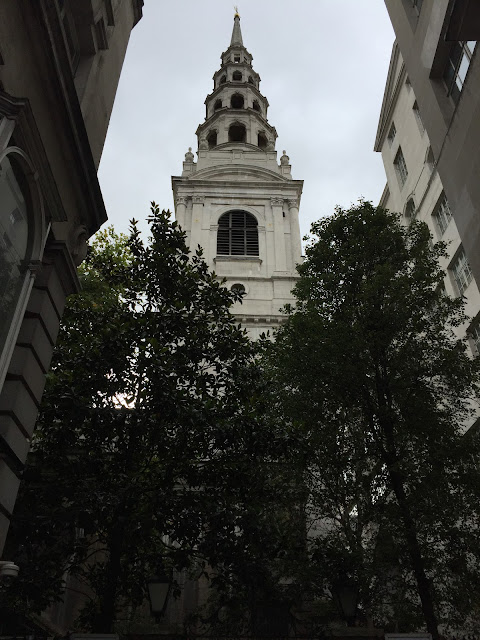 Fleet Street in London has been long associated with newspapers and journalists. But it’s been a long time since any newspapers were actually located there, since all moved to other part of the metropolitan area. In the fall of 2017, I walked Fleet Street and some of the side streets on a cloudy, rainy Sunday, and say only one vestige of the area’s newspaper past – fading letters on the side of a building. A few former newspaper buildings have been listed on the historic register and preserved, but no newspapers operate here today.

The area includes the Temple, still a part of the legal industry, notable buildings like St. Dunstan-in-the-West Church, the Samuel Johnson House, the Royal Courts of Justice at the western end of the street and the Old Bailey near the eastern end, and many more. On my visit that Sunday, I stopped long enough to take a photo of a lawyer’s gown and wig for sale at a shop.

The church long associated with Fleet Street, so much so that it’s still called the “journalists’ church,” is St. Bride’s. The site may be one of the oldest church sites in London, dating back to the 7th century.

To continue reading, please see my post today at Dancing Priest.
Posted by Glynn at 9:00 AM