“Attack at Daylight and Whip Them” by Gregory Mertz 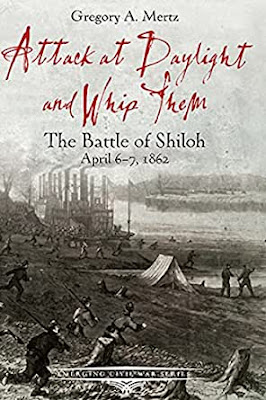 At the time, April of 1862, Shiloh was the most devastating battle in American history. The combined tally of casualties for both sides was an estimated 23,746 – some 3,500 dead, 16,000 wounded, and almost 4,000 captured or missing. The two-day battle, despite Confederate success on the first day, was ultimately decided as a Union victory.

Despite the Union victory, people were so horrified by the carnage that, in the north, newspapers called for the dismissal of the commanding generals. That didn’t happen, but Shiloh was an indication of the terrible battles to come. (The battle is sometimes referred to as Pittsburg Landing, the nearby spot on the Tennessee River where the Union unloaded supplies. Shiloh was the name of the church or meeting house around which the battle was fought; its name means "peace.")

In Attack Them at Midnight and Whip Them, National Park Service historian Gregory Mertz does two things. He tells the story of the Battle of Shiloh, while he provides an in-depth guide for driving the battlegrounds. (The Park Service also offers a suggested guide for an automobile tour, but Mertz includes little-known details, history, and context.)

The title of the book, a quotation by Gen. Ulysses S. Grant, who was the commanding Union general at Shiloh, is also an almost identical quotation by General Albert Sidney Johnston, the Confederate commanding general who was killed at Shiloh (Mertz raises the possibility that it might have been by friendly fire). Grant was attempting to reach Corinth, Mississippi, an important Confederate rail hub; Johnston had rushed his army to the Shiloh area to stop him.

Over the course of April 6 and 7, 1862, the battle seesawed over fields, streams, roads, and forests. Almost too late, Gen. Sherman understood the Confederate threat before he finally acted. Gen. Grant was alerted to the battle when he heard the cannon booms. Gen. Buell was hurrying his Union troops to the scene, arriving barely in time. The first day went tothe Confederates; the second day and overall victory to the Union. But it was a costly victory.

Mertz carefully guides the reader (and presumably automobile driver) through the site. It’s a complex tour, and a complex story, as battle lines ebbed and flowed. He does an excellent job of matching the contemporary scene to action during the battle.

For 40 years, Mertz has worked with National Park Service, most recently as Supervising Historian at Fredericksburg and Spotsylvania National Military Park. A native of the St. Louis area, he received a bachelor’s degree in Park Administration from the University of Missouri and a master’s degree in Public Administration from Shippensburg University. Growing up in what is now Wildwood, Missouri, a St. Louis suburb, Mertz paid numerous visits to Shiloh National Military Park for Boy Scout field trips.

After the Battle of Shiloh, Union soldiers buried their own dead in individual graves. The Confederate dead were buried in nine mass graves, three of which have never been found. The year after the war ended, Southern women went to Shiloh and placed flowers on the Confederate grave sites. When they noticed the absence of flowers on the Union graves, they distributed the flowers to include them as well. A group of Northern women heard the story and did something similar. It was an act that eventually led to a national Memorial Day.

Email ThisBlogThis!Share to TwitterShare to FacebookShare to Pinterest
Labels: Attack Them at Dawn and Whip Them, Battle of Shiloh, book review, Civil War, Gregory Mertz