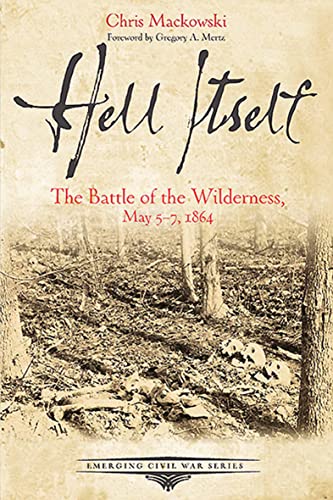 Once Ulysses S. Grant became commander of all the Union’s armies, he undertook two efforts that ultimately helped defeat the Confederacy. First, he coordinated the campaigns of all of the Northern armies, and not only those forces under his immediate command. Second, he made a concerted effort to capture the Confederate capital of Richmond.

In 1864, the campaign against Richmond was renewed in earnest. Grant was attempting to avoid a frontal assault and instead sweep around and back. To do that, he had to move his Army of the Potomac through 70 square miles of densely wooded terrain known as the Wilderness. The area was inhabited, if sparsely. Moving an army through it, with its artillery and supply wagons, would be difficult, but Grant was determined.

So was Robert E. Lee. He understood what Grant was attempting, and he was just as determined to stop him. Two steel wills clashed – and the Wilderness exploded. Literally.

In Hell Itself: The Battle of the Wilderness, May 5-7, 1864, Chris Mackowski does two things. He tells the story of the main points of the battle, and he provides detailed directions for a tour of the battlefield by automobile. (“Battlefield” is a limiting term here; there was no one field or area of open terrain where everything happened.) The book is part of the Emerging Civil War Series.

In addition to writing some of the volumes, Mackowski serves as editor for the entire effort. A professor at St. Bonaventure University, he has B.A., M.A., M.F.A., and Ph.D. degrees in communication, English, and creative writing. The author of some nine books, he’s written extensively on the Civil War for a number of publications. He also worked for the National Park Service and gave tours of the Civil War battlefields at Fredericksburg, Chancellorsville, Wilderness, and Spotsylvania.

The Wilderness was a horrific battle, deserving of the name given by one its participants, “Hell Itself.” The terrain and denseness of the forest often meant hand-to-hand combat. Artillery fire often resulted in the woods catching fire, and soldiers on both sides were burned to death.

Hell Itself brings the battle to life, making the reader feel almost a first-hand observer. You wonder, as did many who fought there, how anyone made it out of those woods alive.

Attack at Daylight and Whip Them: The Battle of Shiloh, April 6-7, 1862 by Gregory Mertz.

The Last Road North: A Guide to the Gettysburg Campaign, 1863 by Robert Orrison and Dan Welch.