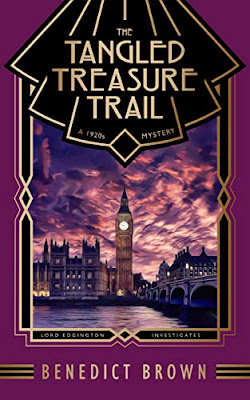 It’s a London winter in early 1926. The newspapers are full of stories about the Bright Young Things, a group of mostly young adults who are partying all over the city. Their latest activities focus on madcap treasure hunts, starting at places like the street in front of Buckingham Palace and racing their cars and each other to the next clue in their hunt.

At one such hunt, there’s a death. An older member of the group, an industrialist, dies in a car crash. It appears accidental. Lord Edgington, now 75 and retired but at one time the chief superintendent at Scotland Yard, grabs his 17-year-old grandson Christopher Prentiss and races to London. They’re just in time to participate in the next treasure hunt of the Bright Young Things.

Christopher is starstruck. He’s even more starstruck when the leading members of the group – an artist, the wealthy aristocratic heiress the artist is engaged to, and the rather flamboyant hunt organizer take a shine to the teenager and pull him into their antics. But, during yet another treasure hunt, the artist is found dead. This time, there’s no mistake. This was no accident; the artist was shot dead.

Lord Edgington and Christopher investigate, both helping the police and being helped in turn. And slowly they’re sucked into a case that has its roots in World War I.

The Tangled Treasure Trail is fifth Lord Edington mystery novel by British author Benedict Brown. As with its predecessors, it’s full of period context, an action-packed story, and a host of suspects. It’s a rollicking good read.

In addition to the five published Lord Edgington stories, a sixth is scheduled for publication in the summer of 2022. Brown has also written seven Izzy Palmer mystery novels and three novellas. A native of south London, he lives with his family in Spain. The Lord Edgington mysteries are likely aimed at both the general reader as well as the young adult audience. And they’re well-researched stories, full of information about the mid-1920s.

Murder at the Spring Ball by Benedict Brown.

A Body at a Boarding School by Benedict Brown.

The Mystery of Mistletoe Hall by Benedict Brown.

Death on a Summer’s Day by Benedict Brown.