"The Mystery of Mistletoe Hall" by Benedict Brown 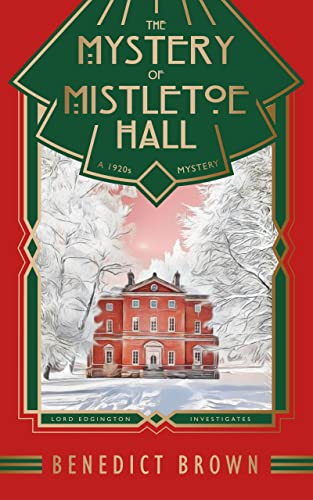 It’s England, 1925. Seventy-five-year-old Lord Edgington is invited with his family for Christmas at Mistletoe Hall. The invitation comes from his old colleague from the police; the two had worked together for decades. He doesn’t bring the whole family; accompanying him are his daughter and two of his four grandsons, Albert and Christopher. The youngest at 17, Christopher has often “helped” his grandfather solve several crimes and murders.

The snow is getting on the deep side as they arrive. The surprise is that Mistletoe Hall is ready to welcome guests with everything except the host and the servants. The place is devoid of human life. Fortunately, Lord Edgington brought several of his own servants with him, including the cook. In search of a Christmas tree, Christopher works his way through the snowy garden and woods beyond. He finds the perfect tree; he also finds their host, shot through the chest and very much dead.

Other guests arrive – a governess, a woman racing car driver, a stage comedian, a well-known cricket player, a fellow school student of Christopher’s and his father, and a police detective whom Lord Edgington knows well and has disliked the man as long as he’s known him. As the continuing heavy snow makes travel impossible, people start dying.

The Mystery of Mistletoe Hall is the fourth Lord Edington mystery by British author Benedict Brown. Like the other four mysteries in the series, it is part legitimate mystery and part send-up of the traditional mystery genre. Think Agatha Christie with the bite of satire.

In addition to the five published Lord Edgington stories, a sixth is scheduled for publication in the spring of 2022. Brown has also written seven Izzy Palmer mystery novels and three novellas. A native of south London, he lives with his family in Spain.

The Mystery of Mistletoe Hall, despite the pileup of bodies, is a fun, light mystery almost designed for casual reading at Christmas. It’s also well-researched; Brown colors the story with a number of historical details that place the reader smack in the middle of the 1920s.