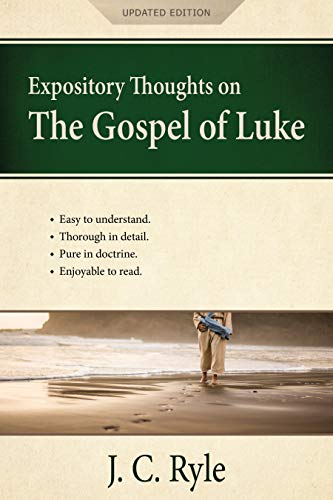 John Charles Ryle (1816-1900) was a British theologian, pastor, preacher, and writer. He worked as a minister in rural England for 38 years, until he became the first Anglican bishop of Liverpool in 1880. He worked steadily until he retired in 1900, the same year he died at age 84.

He was born into a wealthy family; he father was a banker. As the oldest son, he was expected to inherit his father’s state and pursue a career in Parliament. He attended Eton and Oxford. In 1837, he became a Christian. He continued to follow the path chosen for him by his family, including the study of law after graduation from Oxford. But in 1841, his father’s bank crashed, and the family was financially ruined. Needing a job, he turned to the Anglican Church; his Oxford degree qualified him for the clergy.

Ryle was a prolific writer. His works include studies of prophecy and end times, holiness, preaching, parenting, and Bible studies. Perhaps his best-known works, still published today, are his “expository thoughts” on the four gospels of the New Testament.

Expository Thoughts on the Gospel of Luke is one of those four. The Gospel of Luke is considered the “research version” of the life of Jesus, because Luke was not an eyewitness. He arrived on the scene during the ministry of Paul, and at some point he wrote an account of Jesus’s ministry with his gospel and followed it with an account of what happened after (Acts of the Apostles), describing the period of the very early church and Paul’s ministry.

Ryle’s expository thoughts are exactly that. He moves through the entire gospel, section by section, and provides insights into what is happening. The insights, written in highly accessible language, read like sermons, and it wouldn’t be surprising to learn that they first started out life as sermons and sermon notes.

His section on Luke 4:23-32 is an example, the “prophet is without honor in his own country” passage. Ryle cites three great lessons from the account. “We learn, for one thing, how apt men are to despise the highest privileges when they are familiar with them…We learn, for another thing, how bitterly human nature dislikes the sovereignty of God…We learn, lastly from this passage, how diligently we ought to persevere in well doing, notwithstanding discouragements.” The structure of his discussion is familiar, even today, as that of a classic sermon.

Expository Thoughts on the Gospel of Luke was published more than a century ago, but its insights and wisdom are timeless, and they still have application to us today.