"A Soldier and a Fisherman" by Doug Spurling 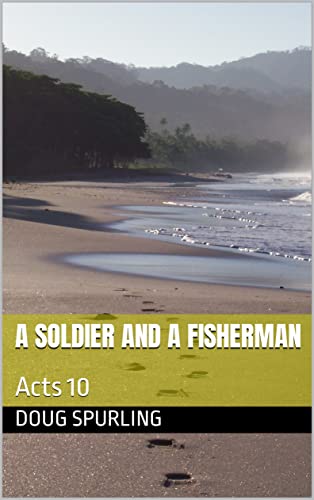 In A Soldier and a Fisherman, Doug Spurling takes us into Acts 10, the story of Cornelius the Roman centurion and Peter the fisherman and disciple of Jesus. If there were an a more unlikely pair who would transform very early Christian understanding of the law and set Christianity on its revolutionary course in society, you might be hard put to find one.

Cornelius was the Roman centurion charged with keeping the peace in Caesarea in Judea. He also happened to be the one commended by Jesus for his faith. And he had held fast to his faith. Cornelius hears a command – to send to Joppa for a man named Peter. Cornelius knows what to do with a command – and he sends three men.

In Joppa, Peter is staying with Simon the tanner. He is praying on the roof when he has a vision – a sheet let down from heaven full of the things that were considered unclean under Jewish law. And he, too hears a voice, telling him to kill and eat. That came as a shock to Peter’s Jewish teaching, training, and thinking. But the voice wasn’t finished; Peter is told that three men are looking for him, and he is to go with them. And like Cornelius, Peter obeyed, fathering some friends to go with him.

When they meet, a revolution starts – the understanding that Jesus didn’t die for only the Jews. He died for Gentiles as well.

Spurling retells this story in an expository fashion, citing the specific Bible verses as he expands upon the story. (He points out the significance of Simon the tanner to the narrative – a man practicing what the Jews considered an unclean trade.) We’re put into the minds of Cornelius and Peter. We initially see what they initially see. And we come to understand what they came to understand. The story comes alive in contemporary language.

Spurling is the author of the novel The Voice and lives with his family in Minnesota and Florida. A Soldier and a Fisherman is a short but impactful account of Cornelius and Peter is a gem of storytelling and insight.