"The Shivering Ground & Other Stories" by Sea Brkat 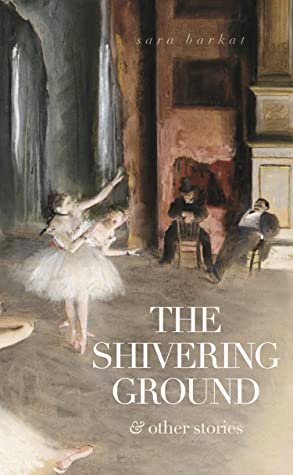 The Shivering Ground & Other Stories may be one of the most unusual collections of short stories I’ve read. These 11 stories by Sara Barkat defy classification. They might be literary, science fiction, alternative, speculative, dystopian, or something else. Every time I tried to define them, they slipped away and then around and laughed at me.

Whatever the genre, the stories are all good ones. Fascinating ones, in fact.

“The Door at the End of the Path” is ostensibly about a door in a garden and the little girl who wonders what’s on the other side. But it becomes a metaphor for something else entirely. “Conditions” is about a man and the sister he hates more than anyone in the world. “The Mannequin” is just that – a mannequin, which stands dusty in a corner and contains the narrator’s heart.

In “Brianna,” the title character is seeking a kind of escape, depending upon her brother orfriend or relative Peter to design an airship. “Noticing” is a bird story, told from the birds’ perspectives. “The Day Before Tomorrow” is a dystopian story, as two girls watch the gradual but relentless encroachment of a “mass of dark buzzing:” containing the “sound of waves.” It’s a phenomenon no one talks about, but it’s getting closer.

The title story, “The Shivering Ground,” is a futuristic (or perhaps not) story about a man guarding a captured Solenoid, a creature whose people have waged war against humanity for a long and vicious time. And jailer and jailed are beginning to understand each other.

Barkat is the author of The Midnight Ball and The Yellow Wall-Paper: A Graphic Novel. She also worked with Tania Runyan in a collaboration for How to Write a Form Poem: A Guided Tour of 10 Fabulous Poems. A writer for Poetic Earth Month, she lives near the Hudson River in New York.

The stories of The Shivering Ground are dark, often dystopic and apocalyptic tales. Common themes course through them: environmental concerns, broken relationships, and a sense that what we know is ending, and how we cling to that familiarity even when it should be abandoned. These are provocative and thought-provoking stories, placing the reader on the edge between the familiar and the unknown.