"The Viking Heart" by Arthur Herman 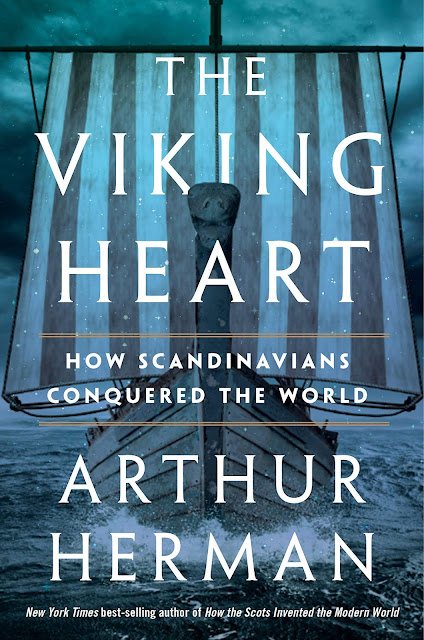 They pillaged and plundered Britain. They threatened Constantinople. They father the Germanic tribes that threatened and eventually sacked Rome. They showed up on the steppes of Russia. They became the Normans who landed in England in 1066. They founded Iceland and established settlements in Greenland. And they landed in North America 400 years before Columbus.

“They” are the people who came to be known as the Vikings, the people who lived in what is now Denmark, Sweden, and Norway. And they transformed the world.

In his highly readable The Viking Heart: How Scandinavians Conquered the World, historian Arthur Herman tells their story. And what an enthralling, thrilling story it is.

It’s an eye-opening account. We’re familiar with the story of the Viking attacks on Britain and Ireland, and how they founded settlements there. Less well known their connection to the Germanic tribes that confronted (and often defeated) Roman armies. The Vikings were called the Rus and gave that name to Russia. They sacked the suburbs of Constantinople.

And their influence didn’t stop with the end of their marauding ways. Herman describes the role of the Swedes in the European land wars of the 1600s, and the peaceful “invasion” of the United States via immigration in the 19th and early 20th centuries.

And throughout his well-written account, he asks and answers the question: what was it that propelled these people to wander, fight, sack, plunder, dominate, control, and influence so many countries, empires, and regions? And he gives a solid account of how they often fought each other.

Herman is a popular historian who’s published Freedom’s Forge, How the Scots Invented the Modern World, The Idea of Decline in Western History, To Rule the Waves, and Gandhi & Churchill. He/s taught at the Western Heritage Program at the Smithsonian’s Campus on the Mall, and he’s been a professor of history at Georgetown University, The Catholic University of America, George Mason University, and The University of the South at Sewanee. Gandhi & Churchill was a finalist for the Pulitzer Prize.

The Viking Heart is a fascinating account of a people who have played a major role in European, Asian, and North American history.