“The Last Road North” by Robert Orrison and Dan Welch 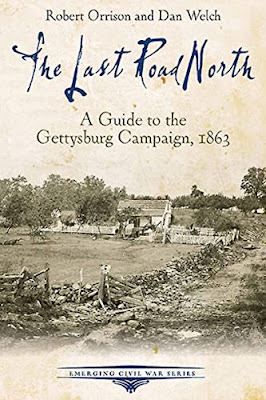 The Battle of Gettysburg occurred from July 1 to July 3, 1863. The forces under Confederate General Robert e. Lee had carried the Civil War into the North, crossing the border state of Maryland and then invading southern Pennsylvania. The outcome was important – a Union defeat would have put Baltimore and Washington, D.C. in imminent peril and perhaps convinced the Northern public that it was time to let the South go.

The campaign, which followed the remarkable Confederate victory at Chancellorsville (April 30-May 6, 1863), began on June 9, 1863 at the Battle of Brandy Station. Gradually, confederate forces made their way north, with the major confrontation near the town of Gettysburg, Pennsylvania.

As part of the Emerging Civil War Series of combined historical accounts and motor tour guides of Civil War Battlefields, in 2016 Robert Orrison and Dan Welch published The Last Road North: A Guide to the Gettysburg Campaign, 1863. The book is a concise discussion of the campaign from both the Confederate and Union perspectives. It carefully explains why Lee made the decision to go to the North (and how he had to convince Jefferson Davis and his cabinet), how the Confederates advanced, how the Union armies responded to the advance, how Jeb Stuart brought his forces to the campaign (something of a near thing), the battle itself, and the Confederate retreat from Gettysburg.
The campaign was complex, requiring a number of river crossings. The Union generals understood from almost the beginning that the Confederates were up to something, but it took time to determine exactly what that something was. In the meantime, as Confederate forces moved north and the Union forces parried and probed, a number of engagements or minor battles developed, usually involving cavalry.

The book includes very specific instructions on how to drive (or come close to driving) the campaign routes on both sides, as well as for the three-day battle itself. Instructions are so specific that they’ll note the need for caution in trying to cross busy roads and highways. The book is small enough to be portable and carried with you as you do the tour.

Profusely illustrated with photographs and maps, The Last Road North is an excellent guide to one of the most significant military engagements of the Civil War.

Attack at Daylight and Whip Them: The Battle of Shiloh, April 6-7, 1862 by Gregory Mertz.