L.L. Barkat posed a monstrous challenge for this week's Random Act of Poetry at the High Calling Blogs -- write a poem from a monster's point-of-view.

I couldn't write one poem from a monster's perspective. But I could write two.

A Good Year to be a Zombie

Appearances deceive.
And it hurts.
Yes, I lurch a little when
I walk. A bit ungainly.
It’s the arthritis, common
to the undead,
especially the long undead.
My skin, well, yes, there’s
that I suppose. Yes, I
know it has a greenish-purplish
tinge and a few splotches, and
some pieces fall off now and
then (shaking hands is always
problematic: “let me give you
a hand”). Then, the clothes.
Sure, I could be more stylish,
a kind of Coffin Chic,
but even if I didn’t
scare the clerks at Brooks Brothers
just by walking in the door, I’d have
trouble with my stiff
arms (arthritis again).
And no Visa card.
The undead can’t get credit cards
but they do let us vote
in Chicago.
But I hear there’s this guy
In Texas,
who’s good for a cup
of coffee,
and maybe he’ll buy me a
venti non-fat latte; if I find him,
it will be a good year for a zombie.
And no iced latte, please;
I can’t shake the chill. 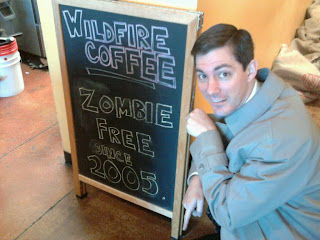 (Photo by someone obviously not Marcus Goodyear; used with impunity.)

It’s a Long Time Between Gigs

Hey! Another pina colada, and don’t
forget the umbrella!
So it may look cool, hanging here by
the pool, but it’s work. You have to
be seen, baby, and it can be a long
time between gigs. I was huge, man,
back then, big time. Walk down the
street, show up at the Brown Derby,
no reservation, people noticed, man.

It was 30 years, three decades, from
Fay to those Japanese send-ups. I
parodied myself in a language I
couldn’t speak; pitiful but you have to
eat. But Fay, ah, now there was a real
sweetheart, always watching out for her
leading man. The planes buzzing the
Empire scared her more than me, but
I knew it was OK, man.

All that fame; I loved it. They asked me
to concrete my prints at Graumann’s,
you know. But we had to do it out back
in the parking lot. That’s a joke, son.
Yeah, I know the Japanese movies
were embarrassing but look, I needed
the money and all I had to do was knock
down a few buildings and power lines and
beat up Godzilla. And it paid good.

But those Japanese, no romance. No Fay.
And sure I wanted to do Othello or Hamlet
but even Olivier had trouble getting work.
I really thought the remake in ’76 would be
my meal ticket. I even wrote a book, you
know, the old movie-book tie-in. It even
sold OK. And then what? Nothing. My
publicist blew it and I had to fire that
thieving no-good wastrel but don’t quote me.

So I keep up appearances, hang around
Beverly Hills, loiter on Rodeo, do the
premieres and some charity stuff. Tried
out for a few movies, too, do you know that?
Costner got Dances with Wolves after I
stepped on the wolf pack. Accidents happen,
man. That role was written for me. They wanted
me to be an orc in Lord of the Rings but I said no,
I like characters with empathy, know what I mean?

And I miss Fay. She was the best. One of a
kind. Real people, she was.
Hey! Where’s that pina colada?
Posted by Glynn at 9:26 PM

These are great, Glynn! I love the voices you've taken on and the vernacular you use and all those little inside jokes. I particularly like the bit about "The undead can't get credit cards". . . I wonder.

I really think we should collect all these monstrous delights and create an e-book or a pdf for everyone to download. nAncY could illustrate.

oh my gosh. You have found your voice! Is it Cameron? What's going on here?

AWESOME!
Zombies are making a big comeback,it seems,if even you are getting in to it!

Wait a minute. I've been sabatoged.

It's so fun to see you getting into poetry like this. Can't wait until Thursday! (We're live today, btw.)

And poor Kong. He's a romantic at heart.

Ok -- so this was more fun than a barrel of Zombies!

WOW! Where did you "dig" these up? Got a great chuckle...thanks!

Outstanding. What fun, Glynn. I've got visions going of King Kong all stretched out on a lounger by the pool. He's wearing a Speedo.

The poetry and comments, bringing laughter here this morning. Fun.

Glynn knows how to play. Deep, dead, skin falling off play. My hands are bruised, clapping with the others.
Recess is more fun over here. A little BAM in my coffee this morning. Brilliant~

Really need to get you a beret...

I've never laughed out loud so many times in one single post!!!!

I would love to eavesdrop on the stories you will be telling your new grandson ...

I think L.L. is right...such insight into the mind of a monster! Must be those great interviewing skills.

Great picture of Marcus too! He looks like a kid in a candy shop.

Thinking about this again this morning, I wondered if the Kong poem could be turned into a sestina? That might be an interesting game to play with yourself.

Wish your computer had worked last night, man. That was a weird bummer.