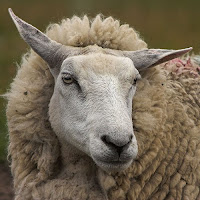 I’ve been reading Wendell Berry lately – That Distant Land: The Collected Stories (see the post immediately before this one); A Timbered Choir: Poems; and Leavings: Poems. And this has all put me in mind of – a sheep.

From the time I was roughly 8 or 9 to 12 or 13, I spent time each summer with my paternal grandmother in Shreveport. I never knew my grandfather; he died when I was nine months old. But these visits were special, for a number of reasons. I was able to spend time with a grandmother I adored, away from my parents, and, either coming or going, I got to fly in an airplane. This was the time when air travel still had something glamorous about it, and you dressed up to fly.

My grandmother lived in a two-bedroom house in western Shreveport, right across the street from my aunt and uncle. The house had been built by my grandfather for their retirement. The front yard by the road was edged with crepe myrtle bushes; I loved popping the buds open. There was a pecan tree in the front yard and a pear tree on the side.

A frame house painted dark tan, it sat on piers and had a combination garage and workshop out back. The garage side of the structure contained an old Ford that my grandmother tooled around in (and our escapades in that vintage automobile should be and likely will one day be a separate post); the workshop side was largely unused but left almost exactly how it had been when my grandfather still used it.

It was a large yard, close to an acre, and part of it was fenced. To keep maintenance costs down, my grandmother kept a sheep in the enclosed area that grazed the grass. Once a year, she had a man come by to sheer the wool. And my job, whenever I was there in the summer or for Christmas or holiday visits, was to throw stale bread over the fence to the sheep.

I don’t recall if it was a male or female, but I think it was a male. I seem to recall it being generally disagreeable, downright ornery, in fact, unless you had something to feed it.

It was that sheep that kept coming to mind as I read Berry’s stories and poems. That sheep was part of a place, a time, of people long gone, and on a piece of land anchored in my memory.

Berry writes a lot about place and land and memory. He also rails against “industrialized aliens” who have forgotten the land and are severed from it – those aliens largely being commercial interests or people with overbearing commercial proclivities or, worse still, people ignorant of what the land truly means (in contemporary society, that's most of us). In one story, he has a character named Wheeler Catlett, an attorney, look at the main street of the town of Port William, and see how much decline there had been, how much there had been that had disappeared, deteriorated and not replaced. It is a kind of mourning scene, mourning at the loss of what once was.

My grandmother died in 1984. My uncle had died before then and my aunt several years later. Both properties were sold. The last time I saw my grandmother’s house, the neighborhood was in serious decline; her house was boarded up and had graffiti sprayed on one side. The fence that had enclosed the sheep was gone, as were the pear and pecan trees and the crepe myrtles.

And I find myself mourning that ornery sheep.

There must be something in the air. Rod Dreher at BeliefNet blogged Monday on “The Impermanence of Things.”

Sheep image courtesy of Martin Junius via Flickr; used with permission.
Posted by Glynn at 10:09 PM

Oh man, I feel the sorrow Glynn. Craig and I lost the family homesteads on both sides of our families last summer. Sold. It is painful not to have 'home' - where so many good memories were made. The joy of being with your grandmother, the looking forward to it - you and Janet will bring that to Cameron. :) Ahh.

Oh, Glynn. I feel you on this one. When I go back to VA, my dad always makes a point to take us past the house where he was born. On the last visit, it was falling down and was all but taken over by weeds and overgrowth.

I find this a fascinating read Glynn -- both beacause of your style and also its content.

I grew up without 'place'. We moved a great deal. My parents didn't own a home until after they retired.

your words are so 'foreign' and yet make such sense to me.

Beautiful even in its sadness.

Though born in Arlington County, I grew up in Fairfax County, Va. We had a bit of land and many, many animals, including, at different times, a pet sheep. Our last one came from the University of Maryland; he had been rejected by his mother, who would only feed his twin. We named him "Sport" and pushed him around in an antique wicker carriage until he got too big and ate all the wicker one day. One of my sisters once put lipstick on him. He had run of the house and woe be unto the person who sat in the place on the couch he liked. He'd back up and run straight for the knees until you moved. His favorite meal was peas and chicken, and when he wanted dessert, he'd go to the low cupboard where sweets were kept and put his hoof to the cupboard door. He did the same when he wanted to go in and out. He was smart and enormous fun. He died my sophomore year of college and I can tell you, tears flowed. We still have great stories we tell of him.

We were lucky growing up. Our house sat on enough land the animals and kids always had plenty of space together and apart. The last time I went back to see our old place all the land had been developed around the only house I'd ever lived in until I was on my own. I cried that day, too.

Your gift of expression made me wish I visited your grandma's place...thanks for sharing!
Peace,
Jay

the what and how we see things as a child. the small things, the everyday things.

it shows us what and how we can still see. how that things as they are can be very special and important.

thank you for sharing wendell berry and your own memories of those special trips to your grandmother's house.

just like jc dude, i enjoy you and your gift of expression.

This reminded me of the stories I used to hear about my grandfather's pet goat ...

I can really relate to this, Glynn. I really like your writing style. "Understated eloquence" is how I would describe it...sad the destruction of the important "places" in our past...probably more sad--those who have no real attachment to a "place" or no fond memories of it.

We took a trip down memory lane several years ago. My grandparents' house, where I spent many summers, is gone. The house my mom grew up in replaced by a funeral home parking lot. Our barn (Forest Dell)pictured in this book

collapsed a couple years ago in a hailstorm/?tornado.

We do have a couple friendly sheep next door, though.

Sarah Salter sent me this comment by email - for some reason this blog site doesn't want to recognize her. I asked and received her permission to post it. Glynn

Glynn, 3-1/2 years ago, my grandmother passed away. Her will specified that we were to sell her property and split the proceeds as our inheritance. Of course, the bottom fell out of the housing market and the house has been unable to sell. Each time we go down there the house looks a little darker, a little sadder, a little emptier--and so does my heart.

When I was 8 years old, the boys in my neighborhood took me to a small, empty rental house to abuse me. About a year later, while we were visiting with some neighbor kids that had moved into that rental house, my brother was accidentally shot in that house by a youngster playing with his stepdaddy's pistol... Christmas '08, I was driving through that community and drove by that house. It's dark, empty, and boarded up now and looking back, I feel a mixture of satisfaction that the house is so desolate. But at the same time, I feel a sense of pity for that little house that once upon a time was meant to be a home and a place of refuge, but that turned into something far different.

I came over from "To my children if they are listening" and I enjoyed your post immensely. I am a native of Georgia who has been in "yankee territory" in Indiana for twenty years. I thought I was the only person who popped crepe myrtle buds. I miss crepe myrtles and pecan trees.

I was also glad for Sarah's sharing. I loved the way she saw that rental house as it should be - or was - once upon a time. reminds me of how the enemy seeks to rob us of our given homested rights.

I hear these old rundown homesteds crying out for the Blessing of family - for peace and quiet rest -activity and love... it is a sad thing indeed.

My word verification here is "detroder" :) seems appropriate for this post.

thanks Glynn - I'm following you now - not many men bloggers with such substance..... :)

It must have torn your heart out to see it like that. I hate change, and would love to have all my childhood haunts remain as they were. Luckily, I live across the country & everything remains whole in my memories.
S. Etole sent me....I'm glad she did.