That Distant Land: Collected Stories includes all of Wendell Berry’s short stories published up to 2004. It’s a remarkable body of work, and it’s only the short stories – it doesn’t include the novels, the books of poetry or the essays and articles.

Maybe I should say what a remarkable writer Wendell Berry is. If you haven’t read Berry before, you should. Choose anything by him. Anything. In his novels and short stories, you walk into the fictional world of Port William, Kentucky. It is a small world, geographically speaking, a few square miles on the banks of the Ohio River across from Indiana. But it stands for something much larger, something more universal, and something that's important.

Two of the stories serve as a kind of bookend summary of the whole volume, and tell you much about the author’s beliefs and philosophy, and the ideas that infuse all of his writing.

“It Wasn’t Me” uses the form of an auction to pit a reverence for the land against the narrow and uncaring commercial use of it. There are three bidders: a young man named Elton Penn who has farmed the land for his landlord; a doctor, who is most likely looking for an investment and possible tax shelter but who would be more than willing to have Penn manage it; and a neighboring farmer who wants to expand his farm holdings, and this particular farm sits right in the middle of it. In the few short pages of the story, Berry explores motives and beliefs, stripping them down to bare essentials. This is a clichéd story of “good versus evil;” it is something deeper and more profound than that.

In the other story, “The Boundary,” 82-year-old Mat Feltner’s world has, because of his advancing age, become increasingly confined to the area immediately around his farmhouse. But he begins to worry that a fence hasn’t been properly maintained, and he sets out on foot to check it, much to his wife’s concern. The fence turns out to be fine, but Mat’s journey turns into both an exploration of memory and the land, as well as a physical ordeal. 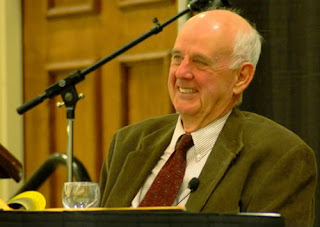 Both stories encapsulate the themes of all of Berry’s writings, fiction and non-fiction alike:
· A spiritual reverence for the land. This isn’t “nature for nature’s sake” but a reverence that recognizes the innate connection we have to the land.
· A belief, some might say a recognition, that for most of us, the connection to the land is forgotten and broken. We think of it, when we think of it at all, as a financial asset, something that’s part of our investment portfolio or that shelters taxes.
· We are stewards of the land, and because of that, we are also stewards of memory, because some of our most profound memories are found in land and place.

All of these stories display a beauty of thought and narrative. And they arranged in the table of contents in the order they occur in Berry’s fictional world. (The novels are also listed in this chronology to show where they are placed in the rich world he’s created.) Arranging them this way, and adding a genealogy and a map at the end of the volume, emphasizes that memory, history and people are inevitably one with the land, part of a coherent whole that Berry believes we have fractured and nearly destroyed in contemporary life.

I couldn't agree with you more: Read something, anything, by Berry.

I had the good fortune to meet Mr. Berry twice while I lived in Lexington, KY. He is an amazing person, and yes, ready anything by him. Poet, novelist, essayist, philosopher--the man is truly an inspiration to yours truly.

Berry is in a class by himself. Everything he writes is a feast for the mind.

Thanks for rec, Glynn! I've read his novels and poetry, but didn't even know about the short stories.

Missing out on such a one makes me feel seriously remiss. Yes, this is a confession. Gordon, where are those wafers? You sure know how to salt our oats Mr. Young.

We are stewards of memory -- beautiful thought Glynn.

And ah yes, Wendell Berry. A must read anywhere, anytime, anything.

A blogging friend introduced me to Mr. Berry. I read "Hannah Coulter" a few weeks ago. It was wonderful. I am ready for more!

I read The Boundary about 10 years ago and found it very touching. His walk back home from the fence, in which he seems to teeter on the edge of death's portal, was particularly poignant.

When we see the inexorable shift of humanity from agrarian to industrial-commercial it is natural to wonder what we might be missing, what good in life might we be living without. Certainly, few have such "spiritual reverence" for the land around us.

However, might I suggest that there is more than a little romanticism in this? Certainly Berry has a strong affection for land and rural community; to him it is rich with meaning - a meaning he mournfully sees as dimishing. But did all the people who lived in such a setting, whose livelihood depended on the land, feel that way? Does this sort of writing appeal to them, or is it poetic nostalgia for those who live in a very different world?

Each of us has the capacity to enjoy deeply certain aspects of life. For some, the "spiritual reverence" may be for construction: the smell of the fresh-cut pine timbers, the whirring of a distant buzz-saw, the joy of working oustide on a sunny day, and the true satisfaction that comes when you stand back and see what the work of your hands has produced: something real, something tangible, something lasting. Or perhaps for some that reverence applies to health care, or software development, or music, or golf, or ...

We love to escape into the fascinating world of other's imaginations (see: movies, books etc), but we must remember that those are only short vacations - and that real life for us is all around. We can sometimes get caught up in what we don't have, forgetting to appreciate what we do... that the grass always seems a little greener in somebody else's dreams.