The Right to Write: Laying Track 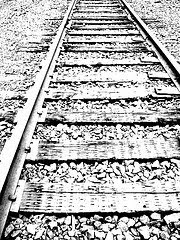 Julia Cameron in The Right to Write talks of “laying track” – getting the words, and getting them all out, before going back to edit and revise. (In May/June issue of Poets & Writers Magazine, short story writer and soon-to-be-published novelist Benjamin Percy has a good article entitled “Home Improvement,” about how revision can also and often does function as major renovation; alas, the article is available only in the print edition.)

I like the idea of getting it all out, and then going back to revise. Revising during the original drafting process is often futile, and it’s been my experience that most writing – a story, a poem, an article, an essay – benefits more from getting the words out first, followed by editing and revising.

And then there are speeches. Or at least the way I write speeches.

I have generally written speeches in the same way since I started writing them, which was, well, let’s just say I was writing speeches before we had desktop computers or laptops and word processing software.

But early on I fell into a pattern, and once I began to recognize it, I formalized it. And it went (and it still goes) something like this.

First, I type the speech draft on my computer. I let it pour out, assuming the words are pouring (sometimes they trickle, and sometimes I have to call the plumber in to unclog the faucet). But assume they’re pouring. I let the whole thing just cascade onto the computer screen. At this point, I avoid editing at all costs, because editing will only bog me down. Julia Cameron would be proud.

Next, the first Big Edit. I engage in what I call SWBWA – speech writing by walking around. I print a copy of the prose torrent, and then I walk around, reading it. There’s nothing magic about the walking; it’s just what I do, most likely out of nervous habit. As I walk, I will often will read it out loud, to listen to how it sounds (well, it is a speech, after all, meant to be heard as opposed to read). I have a pen with me, and often stop to make notes, change a word or phrase, or strike a sentence or paragraph. Back at my desk, I start the second Big Edit –and edit the typed draft by hand. Then I’ll type the changes.

Finally, and especially for those speeches requiring emotional writing or the use of empathy or compassion, I will write those sections by hand, and often over and over again. I can’t explain it, but I write emotional sections of speeches by hand, and it always comes out better than trying to write it on the computer or a typewriter. After I’ve got it where I want it, then I type it into the draft.

It’s probably no coincidence that I write poems like step three of writing speeches – always by hand. But that’s another story.


Over at the High Calling Blogs, Laura Boggess is leading a discussion of Cameron’s The Right to Write. Take a look and see what others are saying, commenting and posting. Last week’s discussion was about writing where you are. This week's is on the "time lie."

Nancy Rosback at Poems and Prayers talks about making time and bad writing.

Nancy's "Just A Minute" at Treasures of Darkness.

"If" by Marilyn as As Good A Day As Any.

"Flight" by ELL at Red or Gray.

Monica Sharman's "The Right to Write."


"Blacktracks," photograph by Nancy Rosback. Used with permission.
Posted by Glynn at 9:38 PM

It's great, isn't it, to have a way that works, a recognizable rhythm you can fall into?

You don't need a station where no track's been laid; just pick a direction and head out.

I had no idea you guys were doing this, which is sort of funny.

I guess I do what you do, more so with work writing, than with my own writing at home - letting it spill out, then speaking it out loud... for anything I write.

Most poetry and blog posts receive little editing, am sure it shows. It's all I can do to get it on paper, and if I wait till I have time to get it right... that doesn't happen.

I rarely write anything by hand anymore. I should, but I don't.

So cool to have you share your personal process Glynn. I like the emotional connection- your pen in hand tandem with your heart. And the reading it out loud to hear it, as it will be heard. Useful post for all.

this is the most wonderful post. i love how you can put so much information into a piece and still it flows so smoothly. you tell a good story and share a part of youself, which makes it even more interesting.

thanks for using the photo.

I could relate to the part about writing by hand. Most everything I write flows through the filter of my fingers.

The writing it out longhand? I'm pretty sure that's a left/right brain thing. I do the same thing. Serious stuff I typically write out in my journal. Everything else is typically typed.

Thanks for sharing your process.

I too let it pour then find the container to wrap around it. My container is the punctuation, the rythm of the words, the cadence. It's made up of those words that punch out, lift up, enlighten.

Editing is the toughest part for me as I can always let the words flow -- it's reigning them into the container that hurts!

thanks for the great post Glynn. Your words are always so beautifully crafted together they sing on the page!

I love your editing by walking and reading aloud.

There is a voice I "hear" when I write. I have always heard it. I think it is the voice of my own heart. But I hear the words somehow. I hear them as though they were spoken, even as they go silently onto a page.

Glynn,
Thank you for sharing the details of your writing process with us. I love glimpsing through a window into the world of another writer. Your method appeals to me -- the walking and reading aloud especially. (I often write speeches for my boss at work, so I am intriqued by the description of your method). I think it would work well for any writing, really.

When I wrote the 5 notes to friends, I felt that emotion you speak of. It was a beautiful Sabbath thing to do (usually I don't write on Sundays, but this felt like a different thing altogether.)

I know why you walk around. Did you know that cognitive activity is enhanced by physical activity? (Brain Rules... great book... have you read it?)

Thanks for sharing your process...now I have to go find my tracks. I know I left them somewhere!

no tracks here but thoroughly enjoy yours ...

Glynn, I stopped by this morning to grab your link but simply did not have time to comment. I'm grabbing a bit now, though...

I love your process!I do something similar to your SWBWA (love it!). I read my work aloud to Lucy Mae. She give rapt attention but little feedback.

You are always an inspiration, Glynn!

The reading aloud can be so helpful. If I can't read it aloud comfortably, I can pretty safely assume that most other folks won't read it easily either. Your approach is helpful. Like others here, I appreciate you sharing it.

Thanks for sharing your process...now I have to go find my tracks. I know I left them somewhere!
data entry work from home