Rather than do the usual Pleasantly Disturbed Thursday (led by our fearless leader Duane Scott) with random thoughts, I’m devoting this one to a birthday. 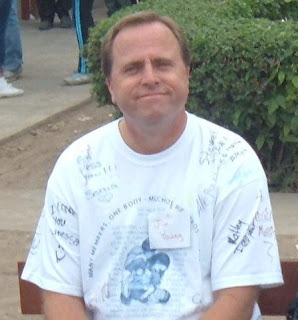 I was 10 years old when he was born. I know it was a Saturday morning because a friend had spent the night, and when we woke up we headed to the kitchen to fix cereal. Usually on a Saturday morning, my father would have already gone to his office and my mother would be resting; she had had a difficult time with the pregnancy.
My friend and I are watching television when the phone rings. It’s my father; he says they’re at the hospital and my mother is having the baby. Total excitement. We get dressed and go flying around the neighborhood with the news. An hour later, my father calls again. It’s a boy. And we go flying around the neighborhood once again (the neighbors thought this was very cute, by the way).
My parents often said we looked like twins born 10 years apart. We both look my father; now that we are older, I’m amazed at how much my brother looks like my father as I mostly remember him – in his 40s.

One event that dates us both: One Christmas Day, I believe it was 1972, I took him to see the Poseidon Adventure. It opened on that day (I think 1972) and the lines were expected to be huge; we went at the 5 p.m. showing and nearly had the theater to ourselves (and I remember the theater – the Robert E. Lee Cinema in the West End of New Orleans; it would get about six feet of water when the levees broke during Hurricane Katrina).

My mother tells the story of what happened when I graduated from college. The family had gone to Baton Rouge for the ceremony, and the next day I left for my first day of work in Texas. When they got home to New Orleans, my 11-year-old brother was very quiet. When my mother asked him what was wrong, he said to her, “He’s really gone this time?” And then he cried.

He lives in the Houston area and works in the oil industry. He and his wife Terri have three boys – Chris, John and Sam. That’s all we manage to have in our family – boys. My older brother has two boys, I have two boys and my younger brother with his three. I have three great-nephews, one grandson and – we don’t know how this happened – one great-niece.

My brother has spent a lot of time in the last several years in Peru, with mission teams from his church. I’ve seen the pictures on Facebook, and I’m amazed to see my brother painting village walls and trying not to sway and dance to the local music. You know which one he is because he’s blond and he has a big nose. (That’s a standing family joke; we argue over which one of us most inherited my father’s nose. From pictures it’s more than obvious; my brother wins hands down. I can say this with authority because he doesn’t blog.) 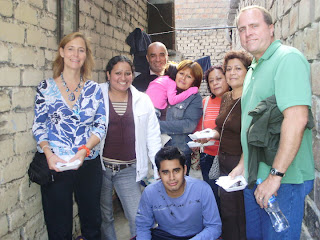 He has a dry sense of humor. He loves jokes and stories as much as my father did and he often sends them to me by email. I invariably laugh out loud when I read them because I can hear him tell the joke or story. He sees the idiocy of what passes for contemporary culture and politics.

My brother and I look more alike as we age. Neither of us look distinctively like our father though. My mom wore the genes in our family. Thanks for the post.

Thanks for sharing this wonderful view of your family line Glynn.

And Happy Birthday to your brother!

I love it when brothers "dwell together in unity", sound like a great dude to me. Thanks for sharing such a awesome tribute!

What a loving tribute, we can see the heart of God in your words!

I know how it is to watch siblings turn into your parents... it's a bittersweet thing.

It is a pleasure to get these personal peaks. :) Happy Birthday Jim. Sounds like a brother is glad you were born. :)

What a lovely way to send a Happy Birthday greeting.

my sister's birthday is saturday.
60 years.

i am to visit her the first of october. meeting in denver then driving up into wyoming to her farm. going with her to to of her three jobs...generally keeping company and getting in her way, and possibly pulling her leg now and then.

They don't make many big brothers like mine. But he DOES have my dad's nose. :)

What a wonderful tribute to your relationship with your brother....:-)

what a birthday gift you have given your brother through your words and love ...

I love this post. I have two much younger brothers and my life is so rich and full because of them.

Happy birthday to your baby bro!

Sweet. And I got a good laugh about your relative authority, based on blogging. ;-)