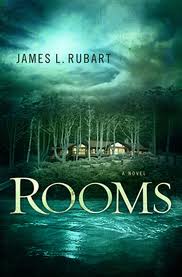 You’re a successful software entrepreneur in Seattle. You live in the penthouse of a condominium. You have a romantic relationship with your firm’s co-founder. You drive a fast sports car. You’ve got everything. And then you learn that a long-dead great uncle has left you a house on the Oregon coast. In fact, it’s a brand-new house, and it’s huge, with every conceivable luxury and fabulous ocean views.
Imperceptibly at first, your life begins to change. And it’s not a change from one lifestyle to another, but from one reality to another. And it’s because of those rooms that keep appearing, and what you find in them, rooms that are doorways into your life.

That’s what happens to Micah Taylor in James Rubart’s novel Rooms. It’s a novel of suspense, a love story, and a morality tale, with slightly more than a dash of the supernatural with a little science fiction on the side (whatever else you want to call it, living in parallel universes is science fiction).

Most of all, Rooms is a portrayal of sanctification. As Taylor discovers what’s behind each new door as it appears, he learns more and more about himself and his life, and all the things in his life he has to come to terms with. And he learns more about God. Ultimately, he will have to choose which life he really wants.

Rubart keeps the reader guessing right to the riveting end. The story is fast-paced, well structured, with believable and even familiar characters. His descriptions and scenes in Taylor’s software company ring true for business.

Rooms has been compared to William Young’s The Shack, although its genealogy may owe far less to The Shack than it does to the novels of Frank Peretti. Regardless of its genes, it is an original. James Rubart has written a terrific story.

For Christian Manifesto, I’ve written a post about novels and the theology they represent, using Rooms and The Shack as examples. Take a look at “’Rooms’ in ‘The Shack’” and let me know what you think.
Posted by Glynn at 3:41 PM

You read in such wide-ranging genres. Your reviews are so positive, too. Will mosey over to CM to read your other post.

just enough to make me want to read it.

Glynn, I read your piece at CM. Interesting.

Frankly, I have no desire to read any of those books, but that is just my personality type... I do have a friend who spent so much time with one of the books you mentioned that she refers to it like most Christians do the Bible. Sadly she now refuses to believe God's Word because of that one book. And certainly she weighs its popularity and thinks it equates to reality.

And the comment that Mr. Rupart left on your article was thought-provoking.

I do think Christian authors especially have a duty not to lead readers astray with their work--no matter the genre or the target-audience.