Pleasantly Disturbed: A fond look back at Labor Day weekend

Time for another weekly edition of Pleasantly Disturbed Thursdays, originated by our recently engaged friend Duane Scott. He’s wandered off somewhere, meeting his fiancée’s parents, so we’ll just have to soldier on without him. 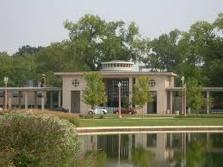 Last Saturday, to kick off Labor Day weekend, my wife and I joined 800,000 other St. Louisans at Forest Park. There wasn’t anything going on in the park; it was just an incredibly beautiful day and St. Louis decided that was a perfect excuse to go to Forest Park. After fighting ridiculous amounts of traffic, we did manage to find a parking place and walked around a bit. We even sat on a bench by the Muny Opera (photo of entrance at left), our outdoor summer theater which is a tradition in a city that thrives on tradition. The tradition is to sit outside on hot summer nights and sweat while you watch musical plays. Yes, I’ve done that. What’s more, I even sat on stage during a live performance of Godspell – a small on-stage audience was one of the props. There were about 20 of us, and we were told to act like an audience. We did. It was fun. I had two hours of no-name fame. And yes, I sweated. 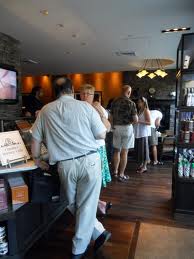 Anyway, after walking around the park, we drove over to the Central West End. My wife found chocolate on sale at Bissinger’s at Maryland Plaza, which not only is a chocolate shop but also a chocolate lounge. She likes their block dark chocolate, and it was on sale for half price. I found something less fattening but more expensive around the corner – Big Sleep Books, a bookstore devoted exclusively to mysteries. I decided an early birthday present was in order. Or actually my wife looked at what I was buying and decided it (a stack of books) was an early birthday present. 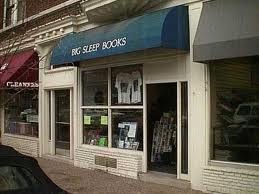 One of the books I bought was Pirates of the Levant, the newest translated mystery by Spain’s Arturo Perez-Reverte. These stories are set in 17th century Spain, and detail the exploits of Captain Diego Alcatriste and his young companion and chronicler Inigo Balboa. This is the sixth in the series and I love these books. They’re full of sword fights and shootings with harquebuses and history and intrigue and betrayal and plenty of buckles to swash.

On Sunday after church, we went apple-picking, also with the rest of St. Louis (notice a trend here – St. Louis does things in large groups, like we’re all one big flash mob). We drove to Eckert's Orchards in Belleville, Illinois, and rode the wagons to the orchards. We hauled in about 50 pounds of Jonathan and Golden Delicious apples.
Monday evening, in a fitting conclusion to the weekend, we went to my son’s house for dinner. And I got a Cameron fix. I’m so glad you asked about my grandson. 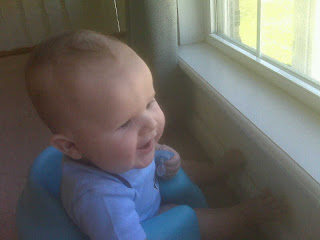 Your weekend sounds great. And bro., I'm still amazed at all that you pack in.

Are you sure there aren't two of you?

Gotta finish it with the grandkid fix.

PDT would not be the same without a Cameron fix.

And I'm so glad you posted a photo of Cameron!

What a handsome grandson he is!

i had to laugh about the pile of books.

good deal on the chocolate :-)

and cameron...
it's so cute with him sitting in his little seat looking out the window. growing so fast!

But of course, we always ask about your grandson :)

The group St. Louis stuff was amusing... and the chocolate escapade... well, let's just say I wish I were part of the St. Louis group for that. ;-)

Sounds so sophisticated 'n all. Cameron is is is is is
squeezy good. He's our communal celebrity, we all feel like we have a part of him, because you share.

Wow, sounds like fun, Glynn. I will admit though that I took way too much time trying to decide in my mind the pronunciation of 'St. Louisans' and I finally gave up. :)

Flash mob. That is new to me.

- do they mob ya like a sheet or bolt of lightning?
- is it a mob with a lot of camera bulbs going off all at once?
- is it a group of folks that flash ya all at once?

It's okay to wonder this out loud since this is the pleasantly disturbed post, right? I can be pleasant when I want to and I am quite disturbed.

A lovely weekend indeed Glynn. Dark chocolate and a mystery book store - I can't decide which is more wonderful.
I have always wondered what phenomenon it is that suddenly makes what seems like the whole world (or city) decide to do the same thing at once. For instance, years and years ago I decided tennis would be something good to take up - and suddenly so did everyone else in the known world!
Thank you for the baby picture; he is absolutely precious! Treasure these moments. Our very first grandchild just entered college. I cannot, for the life of me, figure out how that happened so fast!