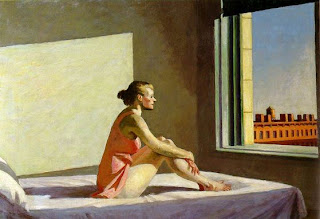 The first time I remember worrying about something was when I was four years old. We were moving to a new house in a new subdivision, with a lot of undeveloped woods right across the street. I rode with my father back to our duplex to retrieve kitchen stuff like pots and pans. I didn’t want to leave my mother by herself at the new house, and I asked my father, “Will the bears get her?”

When I was 8 and in the third grade, I accidentally brought a book home that we were absolutely forbidden from taking from the classroom. I was horrified. I was too afraid even to mention it to my parents. That night, I went with them to a little theater production of “The Music Man,” and fretted about that book all through the evening.

Worry is a theme here. I can look back and see that I worry about the kinds of things we all tend to worry about – generally, the things I have little or no control over. That, to me, is a lesson to keep learning. Just because I understand what I worry about doesn’t mean I won’t worry ever again. It doesn’t me “go ye therefore and don’t worry.” But I recognize it for what it is – a response to circumstances I think I can control better than God.

Many of these situations were serious. My wife’s surgery, for example. She had had our firstborn three months before the doctors decided she might have thyroid cancer. She didn’t, but it was scary. And we were worried. I’d like to say we cast all our concerns on God, and we did, but we were still scared. Being human isn’t something you can flip on and off light a light switch.

I can’t fling my worries to the wind. Neither can I embrace my “inner worry.” But I can understand it for what it is, attempt to keep it from consuming me, pray like a crazy person when I think I’m being overwhelmed with it, and gain perspective by talking to others.

And no, nothing happened when I quietly and unobtrusively slipped the book back into my desk.

And my mother didn’t get eaten by bears. She’s still living in that same house, and the most exotic thing that wandered into the neighborhood was the leg bone of an elephant someone discarded in an empty lot.


Over at Faith Barista, Bonnie Gray is hosting a blog and comment discussion of “keeping faith fresh.” Last week’s discussion was on unexpected encouragement. This week’s is on letting go of worry.

I couldn't help but see myself as you described the things you've worried about.

It takes most of us at least half a lifetime to learn how to let go of what we can't control, perhaps because implicit in lack of control is fear. I'm trying to learn to question the fear itself, not why I'm afraid. I suppose that's just another way of saying, accepting being human.

Worry is pervasive isn't it? Thankfully so is grace, but I can't have both so I have to make the exchange. Thanks for the great reminder, Glynn.

Glynn,this is such a problem for so many....worry...we waiste so much time doing it...i know i have. Letting go and letting God....is a simple concept...yet not really simple to do when faced with the problems of our lives. Thank you for sharing your wonderful post. :-)

I come from a long line of worriers, so I completely see myself in your post.
I love this: "But I can understand it for what it is, attempt to keep it from consuming me, pray like a crazy person when I think I’m being overwhelmed with it, and gain perspective by talking to others." Such wise advice. I'm so thankful for friends who can give me perspective and for prayer and Grace.
Thanks, Glynn!

I worry.I justify it as “concern” or better yet, “prayerful concern.” I’ve never suffered an ulcer, but I’ve lost many hours of sleep. I’ve never been on medication, but I’ve let worry interfere with my life.

I'm so far away from not worrying about the future.

hi friend, thanks for your kind visit, enjoyed your post....

What me worry? That was that Mad magazine catch phrase, wasn't it?

And me worry? Yes, I do. I fret and do what my dad used to call "pre worry." I am still pretty good at it. I think I could be a career worrier -- I know I can worry for other people. I do it all the time.

Once, when I was particularly concerned about something, of which, now I can't remember, a dear friend lead me to Matthew 6: 34 -- "therefore do not worry about tomorrow, for tomorrow will worry about itself."

That passage is underlined, high-lighted and etched in my heart --- I retrieve it all the time.

Hey, Glynn. I'm a little late with my poem, but here's my link just in case it's not TOO late.

I love these stories about your worries--they make you much more real to me. These little things that burden our minds...amazing how we make it through the days. And the big ones, of course...well, we can't control them either.

And just this: The leg bone of an elephant? What in the world? Now that was unexpected.

whoops, forgot my link. See how captivating your posts are??

Glynn -- I love that you ended by showing us that worry did nothing to change your circumstances. That's what helps me bring my worry to the Lord. Knowing I can do nothing, and he can do everything.

A fellow employee once told me after a hard day(and maybe you have heard this one): "Denial is highly under rated." It wasn't long after that that he quit his job and moved to Oregon. That said, I usually get busy and stuff worry underneath writing or a visit with a Little Debbie snack cake. Seriously, I don't cast worry to where it should go often enough...to the Worry Catcher.

i love that you shared this. it's powerful. and i want to visit this faith barista... i hope you might share some of your spiritual insights with readers at imperfect prose on thursdays... you bless me.

I am very moved by your words.

I come from a long line of worriers. My mother always says she gives the worry over to God but then she keeps taking it all back. I do the same thing.

Thank you for your honesty. It helped me put my own worries in perspective.

I especially like that you worry about when the "boss goes weird." Aren't you the boss?

AMazing isn't it how worry can eat up so much of our thoughts, and the illusion that we can control anything... the enemy must just sit back and laugh.

This was a great read, Glynn!

Your third grade worry reminds me of my second grade one. For most of a marking period I read and enjoyed the stories in my reading book. I thought the workbook was too time consuming---it kept me from reading! The day before it was due, I tried to get it all done. Obviously, that was a futile. That evening I was a bundle of emotions and worry. It's amazing how worry invades our hearts and refuses to move on at such a young age.

I can' t tell you how much I've enjoyed sipping your faith shots, Glynn! A veteran barista you are ... Your posts are fresh, goes down smooth with a sweet after taste. I REALLY liked how you said resisting worry is a response we practice - ongoing - instead of a war we wage to eradicate one time. A post with revealing our humanity & the divine.

Your last two paragraphs make me want to do a little exercise: list all the things I've worried about that never happened. (My son getting kidnapped is one.)