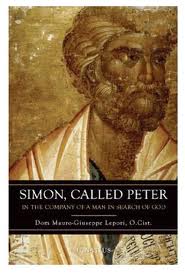 In August, my wife and I attended an exhibition of “Vatican Splendors” at the St. Louis History Museum. It was indeed a splendid exhibit, covering almost 2,000 years of religious art and artifacts. Of all the golden and gilded and painted and sculpted things I saw, what moved me moved most was a small brick enclosed in a case, purported to be a brick from the tomb of St. Paul. It was a humble display of a humble brick, and whether it was truly from the tomb of St. Paul was less important than that it truly depicted the origins of Christianity.
The exhibition gift shop had everything – books, exhibition catalogs, toys, scarves, Christmas ornaments, book markers, jewelry – the normal and familiar sight for a big exhibition. Trade was brisk. I wandered around, paying most attention to the books, and I found a little gem: Simon, Called Peter: In the Company of a Man in Search of God by Dom Mauro-Giuseppe Lepori, abbot of the Cistercian abbey of Hauterive in Switzerland. The book was published in Italian in 2004 and published in English this year. (After reading Edith Grossman’s Why Translation Matters, I feel obligated to say that the translator was Matthew Sherry.)

This is not so much a life of St. Peter as it is a meditation on his life, and specifically the major events of his life during the period when he followed Jesus. The events include the original call by Jesus as Peter stood on his fishing boat with his brother Andrew; the receiving of his new name, Peter; the Transfiguration; the Last Supper (“You will not wash my feet!”); the night in Gethsemane and Peter’s three denials; the empty tomb; and meeting with Jesus after the resurrection.

Peter is a totally recognizable person. He is human, with all of our human idiocies and limitations. His heart had been profoundly transformed, while his human spirit keeps throwing wrenches into everything. He’s a hothead, to be sure, full of bluster, opinions and prejudices. And he crumbles in the presence of his Lord.

Much of this mediation is imagined, but imagined realistically. We don’t have a full record of Peter’s thoughts, but how Lepori describes his reactions and thinking rings true to our understanding. When the fisherman Simon is named Cephas (Peter) by Jesus at his calling, here is what Lepori writes:

“No, Simon was not thinking about the future. Was he thinking about his family, his home, his boat, his business? Yes, he thought about all of this, and in an instant he saw it all with complete clarity and in great detail. He had never before seen his life so clearly and how important everything in it was. He felt sad about his lack of attention and concern toward his family, his brother, his people, his work, his home, his boat, his nets and himself. He realized that he was now looking at everything through the eyes of Jesus.”

Another example is when Jesus preaches the sermon that shocks most of the crowd and most of his followers, and the majority – shocked at what Jesus is claiming to be – walk away. “Gently – but as if a boundary were near that could be crossed with a single word – Jesus looked at the little group of confused disciples. ‘Will you also go away?’ Peter was surprised for a moment when he recognized in the Master’s voice the same tone that he had heard one day from a boy with leprosy, asking them for alms from the side of a country road. An immense sadness took hold of him, and the only reply he could make was a cry for help. His cry, too, was like that of a beggar: ‘Lord, to whom shall we go? You have the words of eternal life.’”

Lepori captures the sheer wonder and strangeness of what Peter and disciples must have experienced in the presence of Jesus. They’d been chosen by him; they believed him. But he said crazy things sometimes that would only make sense much later, long after he was physically gone, only when they had the mind and the heart to understand them.

That is what Lepori captures in this quiet, soulful meditation. It is not a theological treatise; it is a treatise of the heart.
Posted by Glynn at 6:08 AM

I've been thinking about the Disciples a lot lately, and also the use of parables, and what that might have been like to be the first to hear them, live them.

GY
I do love Peter. He is human. I love your business perspective -- he had to think about making a living. And yet, he followed.

What a wonderful trip for you to make. I'm going to look for this book for my husband. Thanks for sharing.

"treatise of the heart"

Last year, I studied the Book of John in Bible Study Fellowship; the close study, even in the simplest of terms, allowed me to see more clearly the subtle differences in those men who followed Jesus.

As always, thanks -- I enjoy, as you know, reading your blog in the mornings.

"His heart had been profoundly transformed, while his human spirit keeps throwing wrenches into everything."

Thank you so much for this posting.
Peter gives me hope. If a man with such manifest human weakness was chosen by Jesus himself, there must surely some small hope for me also.
I really appreciate the way you highlight the fact that the gospel is not an easy message to accept. It is NOT all about living a comfortable life in relative affluence. Far from it. I suspect it is a challenge to leave our comfort zone, give up what we cherish most and embark on a hazardous journey.
I often wonder just how many of us - including myself - would welcome Jesus, if he were to speak in person to us now...