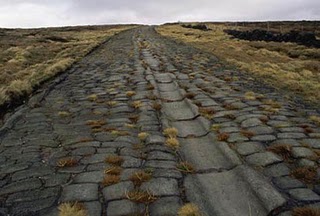 I imagine him walking briskly,
and it would be briskly, don’t
you think, along one of those
great Roman roads, those vias
they marvelled at but we would say
thank you for asphalt and concrete,
I can’t imagine driving on those
stones for long.

Despite the stones or because of
them, his feet and ankles are
covered in fine dust and an
occasional smear of mud when it
rains which isn’t often. His bag has
a few tools and a skin for water
because he’s nobody’s fool and
he know water is life.

He stops in small towns and cities,
wherever he finds a synagogue and
a few places where he doesn’t. When
he’s done speaking he looks to see who
follows after the elders stomp their feet,
always a few but he doesn’t keep count
because intensity matters more than number
and the journey less than the mission.

To see other poems submitted for One Shot Wednesday, please visit One Stop Poetry.
Posted by Glynn at 3:39 PM

Email ThisBlogThis!Share to TwitterShare to FacebookShare to Pinterest
Labels: One Stop Poetry, Poetry

..intensity matters more than number…love this!

I can see him walking la via.

Obviously a man on an important mission. I liked the historical bend of this one too.

I love history this was right up my street, bravo :)

Those first news bearer would have gone to homes and synagogues, welcome reminder of our constant relationship to the people of the MiddleEast. You paint quite the image of the bringer of light. Thank you. Gay

feel compelled to also quote the ending, "intensity matters more than number / and the journey less than the mission." Very well done. The imagery in your lines is amazing.

Good use of allusion in setting this up. Could be read many different ways depending on the readers background/beliefs. Well done indeed!

great imagery. I can see him there, striding forward, gathering souls along with the miles.

A road story with a difference. Excellent.

This gently carried me along on the journey down those forbidding roads. Wonderful Glynn.

intensity matter more than numbers...would have like to get my feet dusty on that road with him...excellent one shot glynn...

Romans built roads to help the traveler build their own. Great piece.

To me, this conjures up Paul. Beautifully done.

if only he could
wash my feet
too~
afterwards

Certainly a journey worth taking.

His mission...
what more can I say but that made all the difference

deep breath taken after that Glynn

A best of One Shots

I could visualize him walking. Wonderful ending too!

great visuals; I felt I was there with Him...wish I had been! This was a great poem

On my way to your post below but how could I pass up this wonderful road.

"...because intensity matters more than number and the journey less than the mission."

Absolutely drew me in... with wonderful words and the stones...

Thank you. And for your encouragement also at MISSIONS
Peggy

I enjoyed this poem so much. I could see him on his mission and the last two lines just reinforced that idea beautifully. It's the journey and not the destination.

Wonderful writing! Your words took me on a journey...

now
i am
imagining one too

Loved every word and so beautifully portrayed. Tight oneshot~

Beautiful, Glynn. Many miles of hard road and yet "...the journey less than the mission."

I happen to think so, too.

Thank you for this reassurance.

“The journey of a thousand miles begins with one step.” Lao Tzu

I've always been fascinated by this period of history and would love to walk on a Roman Road.

it is the process that makes one happy and feel, not the destination,
brilliant message!
beautiful job!

I have visited some Roman ruins (and walked in Roman sewers in two countries), and I was often overwhelmed with the looking back. You do that well, and then some.

The road is long and you make it more bearable.

I imagine too. I love this picture.

You requested RAP links at your blog, so here is mine: Where I Come From.


I feel like I'm still learning poetry - or relearning it. Thanks for the prompt to get back to my roots. I think it was good for me.

Thanks for taking me down that road...beautiful!

i like how you portray the dedication it took to keep going.

a great reminder for us all.

And with His journey we all these years later are blessed with His love, light, and hope! Thank you for this today.

" journey less than the mission." .. i eh\choed the same thought on roads few weeks back ! loved this closing lines ..

Glynn this is such an inspiring poem...the thoughts and truths of a disciple's journey...the last 2 lines say it all...:-)

i saw my poem in this today, but thought yours was so much better...an excellent write my friend..cheers pete

they lived in colour and like us had no idea that they were the past...Thanks for reading and commenting on my poem. Hope your week goes well.

Such a treat, your words. A tightly written piece with incomparable perception. Rich. Love the title too!

Witnessing quite a bit of "stomping elders" myself lately...

Those last two lines are worth it. Great stuff.

(And here's a late link for RAP.)
http://www.goodwordediting.com/sound-your-barbaric-yawp-over-the-net/1376/

Great journey down an historical road!