Over at The High Calling, Laura Boggess has been leading us in a discussion of The Social Animal: The Hidden Sources of Love Character, and Achievement by New York Times columnist David Brooks. Brooks has done something that makes what otherwise would have been a dull if important discussion of studies about human beings – he explains the studies through the fictional account of Harold and Erica. 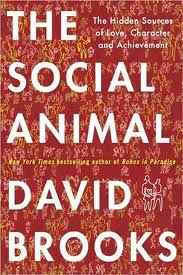 Harold has been raised in a very recognizable upper middle class home and family, while Erica, with a Chinese-American mother and a Mexican-American father, has been raised in a very working class family in Brooklyn. Erica hires Harold for her new consulting business, and gets more than she bargained for: they fall in love. For several years, they have both a successful business and a successful relationship.

Then the economy tanks, and the consulting business goes under. Harold finds a job he loves with a historical society, but Erica is more driven, and more performance-oriented, and she eventually lands a job with a cable company that gets about as close to Enron as you can get without calling it by the name. Erica’s company is like the Titanic heading straight for the iceberg, with a leadership oblivious to its own faults and shortcomings as the drive to diversify the business becomes increasingly frantic.

Brooks surrounds this story with a discussion of two streams of political philosophy and economics that developed simultaneously during the Enlightenment – the English stream that led to capitalism and the American Revolution and the French stream that led to the Reign of Terror. What they shared was a faith in reason. Where they differed was that the English stream understood the connection between reason and passion (or emotion) much better than did the French.

From a business perspective, where almost unadulterated reason led was to what happened in late 20th century America – an almost slavish obeisance to the concept of rational business processes and the redesign of those processes, coupled with a hunger for success and invincibility that Enron served as the stereotype for. And while many industries and companies might have needed restructuring, much of what was sought was a mirage, one that would never be realized.

The fictitious company Brooks describes as Erica’s employer is an extreme example, but it is nonetheless recognizable. A lot of us lived that experience – endless restructurings and downsizings, plant closings, acquisitions and divestitures by the fistful, the workplace overrun by consultants often competing against each other, freshly minted MBAs (often with no business experience) expounding on the proper course for century-old organizations, concepts like turning staff groups into “shared services,” and people becoming known as “resources” and then “talent.” For many people in many organizations, it often felt like a Reign of Terror.

We’re going to live with the consequences of all of this for a long time. I’m deeply interested to see what Erica is going to do, because it sounds like she may aiming for a revolution of her own.

To read more posts on The Social Animal, please visit The High Calling.
Posted by Glynn at 5:00 AM

I can hear your experience talking here, Glynn. It seems the same chapter spoke to us this time around. Not being a business-minded person, I found the discussion on the British and French Enlightenments fascinating. I love how you tie it together here. Good stuff.