The Valentine’s Day That Mattered I first saw her in a college newsroom. She was seated, waiting like a new reporter to talk to the managing editor. “I’m Janet Lowrey,” she said. “Do you have anything for me to do?”

I did: a story on the new chemistry building. And off she went.

Student reporters could request beats to cover, but the final decisions for assignments rested with the managing editor. Every reporter – every single reporter – requested the student government beat. It was the source for numerous stories because of Student Assembly meetings, controversies and the spring elections. She asked for it, too.

She was one of the five students in the reporting class identified by the professor who taught it as the best writers in the class. In addition to student government, she also asked for the religion beat.

She was the only reporter who asked for the religion beat. I was surprised (who would want to cover religion?), but ended up giving her both the beats she requested.

Her requests and my decision changed both of our lives. I could draw a straight line from Janet Lowrey writing “student government and religion” on the request form to my becoming a Christian weeks later. 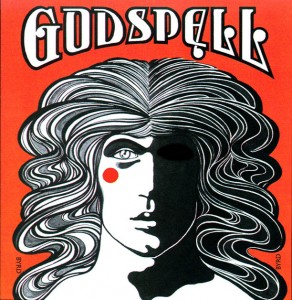 By the time Valentine’s Day rolled around, we were dating. I decided on flowers, and had them delivered to her dorm: red carnations and a single blue iris.

That afternoon, through the big picture window of the newsroom behind my desk, I saw her coming on the sidewalk across the street. She was beaming, and she was carrying something, which turned out to be my Valentine’s Day present – the soundtrack album for Godspell. The flowers long ago turned to dust (although she did take a few pictures). I still have the album with its red , black and white cover.

Eight months after we met, we were married. It will be 39 years in August.

Today, when I see her smile, when I watch her dance with our grandson, when she gets that perplexed look on her face, and when I hear her pray, I see the girl I met, and the girl I still fall in love with.

Somewhere in the words
somewhere among the flowers
somewhere within the music
somewhere between the sprinkles
of a slight snowfall
it was born
it grew
it remained
Posted by Glynn at 5:00 AM

Ahh, Godspell and all of that 70's music. Takes me back to our early-in-love years as well. Would you believe it's also 39? "Those were the days, my friend. We thought they'd never end....." They don't have to!

this one gave me shivers of delight.

And may you have many, many more years together.

It'll be 30 years for me and my Valentine this year. Many blessings on you and your wife bro'!

Oh my gosh, "Godspell" opens Thursday at our local theater. I haven't seen it in 25 years, and my husband has never seen it. Thursday! Also, March 3 with my daughter. And I'm working the show March 2.

I love that this show is part of your story.

"Oh bless the Lord, my soul! And all that is within me, bless His holy name!"

Haven't thought of the music of Godspell in years. Beautiful story, Glynn. Thanks for sharing it!

(And, isn't your wife's response to her assignment as a reporter just a perfect illustration of living the High Calling of a college student? Seemed to work out well for her, too!)

Sweetnessville. The remaining part is the best. :)

I always enjoy the telling of your history.

Oh, this made my heart glad tonight. Thank you, Glynn.