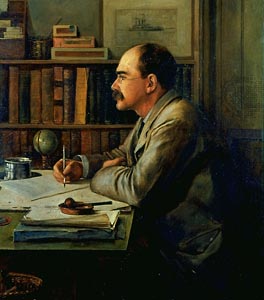 The 1880s and 1890s: It is the zenith of British power in the world. The sun literally never sets on the empire. Queen Victoria sits on the throne. It is the British Raj in India. Imperialism is becoming a widely accepted political philosophy and practice.

If there is one writer, one author who is most associated with the high-water mark of British dominance, it would be Rudyard Kipling (1865-1936). Today he might be most remembered for being listed in the credits of the Disney movie “The Jungle Book,” or possibly as the author of the father-to-son poem “If.” But in his lifetime, he was one of the most popular writers in Britain, producing stories about India and British expansionism, children’s stories – and poems. He was even sounded out about becoming Britain’s poet laureate – and he turned it down.


To read more, please see my post today at The Master’s Artist.

I never knew all this - thanks for sharing.

I'm looking forward to the trip over to find out more.

Thirty years ago, he was in all the English textbooks -- he seems now to be relegated to just one or two selections in the British Literature ones... the reason -- he's too dated.

I hate the term "too dated." He should be in there because he was that good.