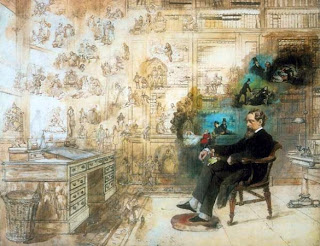 I look at the book’s thickness
and dread (past tense: drood?)
my great expectations but Pip
and the decayed lady
in the decayed wedding dress
captured me, Charles, they did,
captured me forever, opening
the great not the little dorrit
of my head. I twisted
with Fagin but Nancy died,
Charles, she died! while
David in his penny meadow
watched Sydney die so Lucy
could love in one city if not
the other and Little Nell, Charles,
such a curiosity they shopped as
they called to the boats in Boston,
what of Little Nell? What of her?

Uriah heaped evil upon evil and
that little villain who quilped
his badness, Charles, where did
he come from and where did he go?
An even easier miser gave
his name for all as he pondered
the surplus population (like
the child with the crutch, Charles).
Mysteries, wonderful mysteries,
but the greatest was the boy
in the blacking factory
re-imagining the literature,
re-imagining the novel,
re-imagining the language;
he did that, Charles, you know
he did that, that boy; that boy
in the blacking factory
fathered them all.

Today is the 200th anniversary of the birth of Charles Dickens. I was 12 when I read A Tale of Two Cities, 14 when I read Great Expectations and 15 when I read David Copperfield. Dickens opened up a new world for me, and he remains a major influence on my writing.

There’s an online journal assembling all of his known published work: http://www.djo.org.uk/

This poem is submitted for Open Link Night at dVerse Poets. To see more poems, please visit the site. The links will be live at 2 p.m. Central time today.
Posted by Glynn at 5:00 AM

You inspire me to try again, Glynn. I haven't read any Dickens (other than "A Christmas Carol," which I adore) since high school. Pick one for me, and I will sally forth.

nice...i remember books like that opening doors to whole other realities for me...it was later that i read dickens really i think HS but you do well in his memory...

wonderful words for a wonderful writer...need to read more of his books..

This has certainly piqued my curiosity.

It's amazing the impact books have on our lives and the new worlds they reveal to us. Thanks for sharing.

I love Dickens and I love this homage to him....

In Junior High School we read "Tale of Two cities" and "David Copperfield." He left his mark on American History.
Your poem is a tribute to an author who taught many of us to read and write.

This is wonderful Glynn. I love Dickens too. Oh that Uriah Heep...

Life is made of ever so many partings welded together.

Thank you - I did enjoy your playful homage to Dickens! :)

Just last night I was in a writer's group where one mentioned the first sentence in A Tale of Two Cities. One sentence was nearly a paragraph long! I haven't read any Dickens but I know I have heard lines here and there without realizing those were penned by him.