Happy Birthday to Attila the Honey

He was our firstborn, the son of two parents who were rather bookish, studious and quiet.

We nicknamed him Attila the Honey, the original strong-willed child with a tender heart. He walked at nine months, for exactly one day, and then he discovered he could run. At about two, he decided he was an adult, and should be able to do everything his parents did. Like climb in the car and turn on the ignition. He liked to go to restaurants – and climb into strangers’ laps like they were old friends.

When he was not quite five, he no longer needed training wheels on his bicycle.

I can’t remember a time he wasn’t into baseball, but there must have been one. His father wasn’t. Everything Travis learned about baseball, and he learned a lot, he didn’t learn from his father. 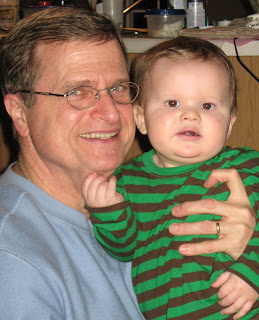 When he was 15, he went on a mission trip to Haiti. This was when President Clinton had sent U.S. troops in to restore civil order, and not all order had been restored. But he went, got sunburned, heard voodoo drums in the hills at night, fell off the back of a truck, fell in love with a bunch of children, helped with a water project and had one of the most important experiences of his life.

After college, he worked a few years (with a local baseball team, the River City Rascals) and then he went off to Phoenix to take an operations job with an expansion league. The league shut down after a year but he found a job with Marriott and started learning the hotel business. He met this girl named Stephanie at church. They got married in 2008. Since nothing would keep Travis away from the home of Cardinal Nation for long, they moved to St. Louis when she was pregnant with their firstborn, named Cameron, who was born in 2010. Cameron is going to have a little brother come May. 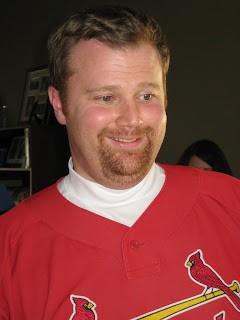 Happy birthday, my son. You taught us much – about ourselves, about faith and about love. You still are.

This is a beautiful tribute, Glynn. Thanks for the glimpse into Travis' childhood--it sounds like it was an exciting one for everyone is his vicinity!

Congratulations on the upcoming addition to the family, too.

What a touching tribute! Your buttons must be popping! Enjoy the celebration! Blessings to you all!

I just all kinds of warm fuzzes from that sweet post.

Such a touching tribute, Glynn. The happiest of days to your son and all of you as you celebrate. Yesterday was my son's birthday and I am so thankful that he is a Godly man.

Glynn, smiles and laughter throughout. What a precious tribute to your son. thanks for sharing with us.

What a beautiful tribute to a son who reflects your heart.

Great tribute Glynn. Except for that crazy shirt he is wearing. It should say "Pirates" on it. I will pray for him.

Oh, lovely story. Thank you. And congrats on grandboy #2 - such fun, such joy. And watching your own kids parent? Isn't that just the most amazing thing??