I have a habit of writing down titles of books I might be interested in reading on yellow Post-It notes, and letting them accumulate until either I toss them all or transfer them to a single page. If they make the single page, I’m likely to buy them at some point. 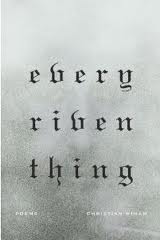 In 2011, I scribbled Every Riven Thing on a Post-It note. I didn’t write the author’s name, but it sounded like a book of poems, or possibly a book by Stephen King. I looked to up on Amazon, and sure enough, it was a poetry collection; the poet’s name was Christian Wiman. It was written on the same Post-It note as a poetry book by Luci Shaw, which suggested there might be some connection. Or not – it couldn’t have been I ran out of Post-It notes and was conserving space.

I recognized the name. Wiman is the editor of Poetry Magazine. That is, until June 30, 2013, when he steps down to join the faculty of the Yale Divinity School.

I did order it, and then read it during the Christmas holidays just past. I didn’t know anything about Wiman other than he was editor at Poetry Magazine (and how I was often surprised to see some various obvious Christian poems make it into the magazine). But I found the poems haunting, sometimes riveting. They clearly spoke to an experience of serious personal illness, and a difficult spiritual journey. And they spoke of grace, and faith, and even hope. I made a note (another yellow Post-It) that said “find out more about Wiman.”

Within just a few days, the January/February issue of Christianity Today arrived, and as I’m thumbing through it I find a major interview with Wiman. Many of my questions were answered. I was so moved by the interview that I went back and read Every Riven Thing again. And knowing didn’t change understanding, but it surely enhanced it. 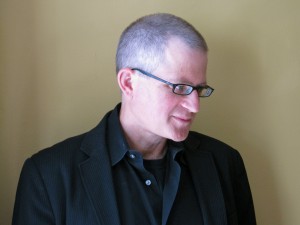 The second reading evoked the sense of a deep, deep silence. Not an emptiness, but a silence, a silence enclosed within a sharp wind, sand and

The interview was less about Wiman’s poems and more about his new book of essay, My Bright Abyss: Meditation of a Modern Believer. The day he turned 39, married less than a year, he was diagnosed with a cancer of the blood. One that’s incurable. According to the article, the essays came after the diagnosis.

I haven’t read the essays, but I suspect that, much like the poem of Every Riven Thing and what he talks about in the interview, they will be the story of a man who lived Psalm 23, and walked in the valley of the shadow of death. “Illness,” he says in the interview, “has brought a great urgency to my work. One speaks differently when standing on a cliff.” Yes, I will read the essays.

In the meantime, I will read the poems. Again.

God goes, belonging to every riven thing he’s made
sing his being simply by being
the thing it is:
stone and tree and sky,
man who sees and sings and wonders why

God goes. Belonging, to every riven thing he’s made,
means a storm of peace.
Think of atoms inside the stone.
Think of the man who sits alone
trying to will himself into a stillness where

God goes belonging. To every riven thing he’s made
there is given one shade
shaped exactly to the thing itself:
under the tree a darker tree;
under the man the only man to see

God goes belonging to every riven thing. He’s made
the things that bring him near,
made the mind that makes him go.
A part of what man knows
apart from what man knows,

God goes belonging to every riven thing he’s made.
Posted by Glynn at 5:00 AM

Excellent. I read the interview as well. My sister said he was also interviewed on the program On Being. I don't write stuff down on post-it notes but his book of poetry will be written on the palm of my hand.

I really appreciate Wiman for his work as poet and editor. I think he has set an awesome example of being a Christian in a place of influence and culture-making. I really enjoy Wiman's poetry. It seems some poets are masters of image, or irony, or ambivalence--and I like Wiman's mystery and sound. The musicality in this book is the best I've read in a while. It's also cool to see his faith develop over the past several years. Here's an interview with Wiman from several years ago:

I've read "Every Riven Thing" at least three times and have shared parts of it with others facing devastating illness. It's become one of the collections I haven't put on my shelf because I continue to re-read from it.

If you haven't seen Wiman's interview with Bill Moyers, do look it up. It's worth the time.

Wiman's 'My Bright Abyss' is due out in April.

Wow! What an incredible poem this is! You now have me wanting to read Wiman's poetry and essays.
So sad to know he has a terminal illness . . . such a bright and beautiful voice will be lost.
Thanks for sharing this, Glynn!

Just fantastic. Thanks for sharing this, Glynn. I definitely want to get this book.

Hearing his voice through these words.