A plea for taking a deep breath 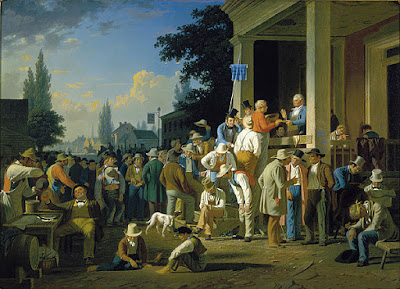 I had another post scheduled for today and I delayed it.

Yesterday, my Facebook news feed exploded in anger and snark. The results in Ohio notwithstanding, people seem convinced that Donald Trump is the Antichrist marching toward Jerusalem – or the GOP convention in Cleveland – like General Sherman marched across Georgia. I’ve never seen such anger, and I thought I'd seen just about everything.

Part of the anger was fueled by President Obama nominating his candidate for the Supreme Court position left vacant by Justice Anton Scalia’s death. That anger was directed at Senate Majority Leader Mitch McConnell, the Republican leadership in the Senate and House in general, the head of the Republican National Committee, and anyone else who might dare to oppose the President.

I think I can understand some of the anger, or at least part of it. The Republican leadership in Congress has caved time and time again to the President; they may still cave on this Supreme Court nomination. I think people were surprised that Mitch McConnell has done (at least for now) what he said he would do. I know I was surprised.

That doesn't mean I thought it was a good idea.

You can blame Trump, but you should blame all the pent up pressures and forces that Trump has helped to set loose. Those pressures were there while Trump was still yelling “You’re fired!” on The Apprentice. They’ve been building for at least the last 15 years, the past four presidential elections and administrations.

I didn’t vote for Donald Trump in the Missouri primary on Tuesday. I decided about an hour before I voted, and I voted for the candidate I thought had the best chance of beating Trump in Missouri. And it was close. It’s still close.

I don’t dislike Trump or what he articulates any more than the next person, but I’ve tried to understand why he has the support he does. I’ve seen the media, professional Republicans, the Beltway establishment, pundits, and everyone else talk about his supporters as less educated, less informed, more afraid, more “yahoo-ish,” more Red Neck-ish, and everything else that allows the educated class to feel superior to other people. Worse yet, I’ve seen many of my fellow Christians say exactly these things. Snark is not attractive; Christian snark is even less attractive.

In fact, it’s ugly, just as ugly as the things Donald Trump has said.

So, I have a plea, especially to my Christian friends: Take a deep breath. Read what Jennifer Dukes-Lee has to say in “Words of hope in these volatile times.” Or take a look at Deidra Riggs, who’s trying to understand something that so many of us don’t. Consider how your words are heard by other people. And who it is your words are supposed to represent. Remember that we don't put our hope in politics. If we did, we'd be doomed to profound disappointment, no matter who is nominated and who is elected.

Jesus died for all of us, including politicians who run for President.

Yesterday, I decided I'd had enough; so, I indicated that any post mentioning a name beginning with T and ending in P would be marked to hide. I just don't want this stuff in my stream anymore.

I can't help but wonder if people would stop feeding the animal or never have started, it might go or have gone away.

One of the few things I can control, albeit to limited extent, is my FB page and what shows there. I don't regret my blackout. There are plenty of other places to receive news. You'll forgive me if I don't post your essay there today.