When I Stopped Being a Republican 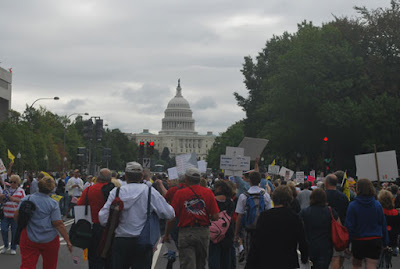 I can tell you almost the precise moment I stopped being a Republican.

It was September of 2005, a few days after Hurricane Katrina had struck New Orleans and the surrounding region. The five days following the storm was one of the most harrowing times I can remember as we struggled to get my mother and aunt out of the city (both in their 80s, they had refused to leave because “we’ve been through this before”).

The state, local and federal governments were overwhelmed. News media seemed to be able to get in and out of the city with ease, while thousands of people were left at the Superdome, the convention center, their own homes. People were dying, and, as we later learned, the federal government (the Bush Administration) and the state government were fighting each other over who should control the relief effort. People were dying while Republicans and Democrats were arguing with each other.

I did what tens of thousands of others did. I took to the internet, to chat rooms, and web sites. I had to figure out how to get my mother and aunt out and find what had happened to my brother and sister-in-law, who lived north of Lake Pontchartrain. The New Orleans Times-Picayune set up discussion sites by neighborhood, and it was through these sites I was able to determine my brother was most likely okay. 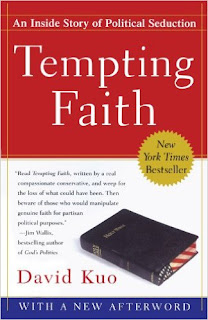 I yelled at the newspaper. People were dying and all the White House cared about a photo opp for the President, to show he cared. Tell that to the elderly woman who died in her wheel chair outside the New Orleans Convention Center.

Republicans might be uncaring, and they might walk in lockstep with CEOs, but they were supposed to be competent.

President Bush and the Republicans had lost me.

The next year, a book was published. David Kuo had been one of those young political writers who had been a policy advisor to John Ashcroft and a speechwriter for Ralph Reed, Pat Robertson, and Bob Dole. And then he reached the White House – what looked to be the pinnacle for a Christian in politics. He served as second in command in the White House Office of Faith-Based and Community Initiatives.

Kuo’s book is called Tempting Faith: An Inside Story of Political Corruption. The media loved it because it embarrassed the Bush Administration specifically and Republicans in general. Few Christians read it.

I read the Wall street Journal editorial and op-ed pages as an antidote to what passes for editorial opinion at the St. Louis Post-Dispatch. But after Kuo’s book, I cannot bring myself to read the Journal’s regular columns by Karl Rove, the man who referred to Christians with expletives.

It’s a book that is well worth reading and rereading, especially in this political year. Unintentionally, it explains part of the reason for Donald Trump. The establishment Republicans were never interested in what Christians were concerned about; they only said enough to keep getting those Christian votes. And now the piper is asking to be paid.

Kuo developed a brain tumor. For a time, it looked like he might make it. But he didn’t, and died in 2013. He had a blog called J Walking, published by Belief Net, which has been left intact but is no longer updated. Occasionally, I reread some of his posts.

I should say that I did not become a Democrat. Or a Libertarian. But my vote is no longer something the Republicans can count on. I don't put my faith in political parties. Or presidential candidates.

Photograph by Peter Griffin via Public Domain Pictures. Used with permission.
Posted by Glynn at 5:00 AM

If the premise is that we as Christians should not be unequally yoked with non-believers, then I agree and understand. But to say that you stopped allying yourself with a party because a president took a photo-op is disingenuous. Think of Obama and Sandy. All presidents do the same thing. Their handlers make sure of it. And, you are quick to blame an inefficient federal government, but say nothing about the Democrats who were in charge of the city and the state, those who failed miserably and made it necessary for the federal government to step in. I don't follow your logic. The fact is, both parties fail miserably at times. Both parties take advantage of Christians, and prey on our values to accomplish their purposes. That is the way of the world. That's why we are to be in the world, but not of it. Christians should not put their faith in political parties or the good intentions of men. That is the real lesson here.

It wasn't the photo op. It was the photo op while the dead were piling up in New Orleans. I don't believe that "this is what all Presidents do" justifies anything. Yes, I could have waxed eloquent about the incompetence of the Democratic governor of Louisiana and Democratic mayor of New Orleans -- and I could have waxed eloquent about how more than a week went by while incompetent Democrats in Louisiana argued with incompetent Republicans in Washington over whom should be in control of the emergency response. It took two weeks, but the federal government finally moved the army in to take over the city and restore order.

I could have also waxed eloquent about the company I worked for found trailers for its New Orleans-area employees and their families to live in temporarily -- until FEMA confiscated them and sent the trailers to Arkansas, where they sat unused. Even Walmart did what FEMA could not -- and trucked food and water in to the devastated areas.

Who rescued people stranded by the hurricane? The employees of the Louisiana Wildlife & Fisheries Department, and hundreds of private citizens who took their motorboats into flooded areas of the city.

Finally, I find little to admire about the Democratic Party. But it doesn't pander for Christian votes and then walk away once it's secured them.

Very interesting to think on. Food for thought. It is hard to find the reality of either party where Christians are concerns. I agree that we are easily duped. We so badly want to believe what others say. I am now interested in the book by Kuo. Thanks for the link.

Glynn, not to put too fine a point on it, but I was in the Coast Guard then. We were credited with saving 33,000 lives during Katrina. Last I checked, it was part of the federal government. I think you make an important point. But your story is not really about the day you stopped being a Republican. It's really about the day you stopped being a blind partisan. That's a good thing, in my book. As to your final point, you're right about the Democratic Party. They won't even acknowledge God in their platform. I don't know which is worse. Pandering to those who don't believe in God, or pandering to those who do.