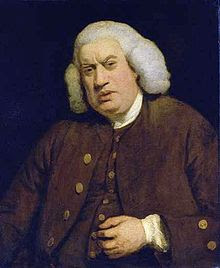 Samuel Johnson (1709-1784), the great lexicographer, wrote three great works that influenced English language and literature even to our own day. The Dictionary of the English Language (1755) served as the pre-eminent English dictionary through the 19th century. The Plays of William Shakespeare (1765) gathered together and identified all of the plays of Shakespeare into one authoritative edition. And The Lives of the Most Eminent English Poets (1779-81) was the authority on the nation’s poets in the period up to the end of the 18th century.

That work on the English poets was one bookend of Johnson’s professional life. I found the other bookend, the one from the beginning, while on a visit to the Samuel Johnson House in London.

Like many writers and poets who came to London in the early 17th century to make a living, Johnson wrote for literary journals, freelanced wherever he could, and generally scrabbled by while he looked for success. His first success was actually published anonymously – a long poem entitled “London (1738),” based on the Third Satire by the Roman poet Juvenal.

Painting: Dr. Samuel Johnson, oil on canvas by Sir Joshua Reynolds (1772); Tate Museum of Art.
Posted by Glynn at 5:00 AM